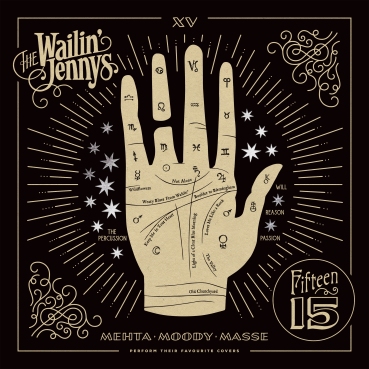 Six years on from their last release The Wailin’ Jennys celebrate 15 years as a band with this very fine collection of cover songs. With all three Jennys now mothers to young children and living on opposite ends of the Americas they say it has taken some time to coordinate enough time off to make a record, the decision to record a covers album however was not down to a lack of new songs but rather down to fans’ requests for some popular live covers to be recorded.

Fifteen sticks close to the Jennys’ trademark sounds. All three (Ruth Moody, Nicky Mehta and Heather Masse) sing wonderfully while their harmonies and vocal interplay is at times astounding. A couple of the songs are sung a capella, the others, for the most part, are accompanied with very spare instrumentation, guitar and banjo (played by Moody and Mehta), double bass, viola, violin, mandolin and electric guitar on one number. The one song with more than a smattering of instrumentation is Tom Petty’s Wildflowers, a live favourite and here replete with guitar, fiddle and banjo. Recorded before Petty died it wasn’t intended as a tribute but nevertheless stands as one, the band’s delivery now incredibly poignant. Much of the album is similarly moving, songs by Jane Siberry (The Valley), Emmylou Harris (Boulder To Birmingham) and Patty Griffin (Not Alone) are sung beautifully with sensitive and glowing arrangements as emotions are wrung from them. Warren Zevon’s Keep Me In Your Heart, a song he wrote towards the end of his life, is sung here with a bittersweet beauty.

The album opens with a traditional English song, Old Churchyard, previously recorded by The Watersons. The Jennys inhabit the song wonderfully, their voices accompanied only by a sombre viola. Dolly Parton’s Light Of A Clear Blue Morning is sung a capella and is more restrained than Parton’s version but retains its sense of freedom and rebirth. The Jennys also tackle Paul Simon’s Love Me Like A Rock a capella and again they take control of the song, changing the gender and sounding like Laura Nyro backed by Labelle on Nyro’s Gonna Take A Miracle album. They close the album with the first song the trio sang together, Hank Williams’ Weary Blues From Waitin’, another a capella tour de force with the three women singing as if they were on a prison chain gang.  Altogether a very fine listen.