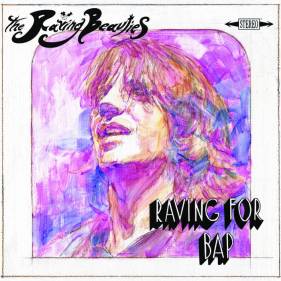 It’s just over a year now since Bap Kennedy died from cancer. Since his death his family have been raising funds for Belfast’s Marie Curie Hospice where he spent his last days and this unique tribute to his music is an opportunity for you to join in.

Raving For Bap is a five song EP performed by Brian Bell of The Raving Beauties and The Dreaming Spires (readers with a good memory might recognise these names from The Paisley Overground mini album they conspired on some time ago). Bell, a long time friend of Bap had been planning on recording with The Spires but in the wake of his passing decided a tribute disc would be apt. However, these disciples of jangled Byrds’ like pop declined to ape Bap’s performances, speaking to The Irish News, Bell said, “We didn’t want to just do ‘straight’ covers of Bap’s original arrangements, so tried to choose songs that would showcase his wonderful song craft and melodic flair, but in a very different way.” The result is five songs, including two from Energy Orchard days, that sparkle in a way that will be familiar to listeners of The Beauties and The Spires.

The streetwise suss of Hard Street, the country blues of The Way I Love Her and the unabashed romanticism of Moriarty’s Blues are here all awash with12 string jangled guitars and sweet harmony singing along with whiffs of mild psychedelia. That all five songs (Walk In Love and Lonesome Lullaby are the other two) are successfully reimagined is testament not only to the band’s skills but also Kennedy’s song writing skills – it’s tempting to imagine him here as the Dylan to the Raving Beauties’ Byrds. Mind you there’s a fine Beatles like guitar feel to Lonesome lullaby, a nice touch given the Liverpudlian affinity with Ireland while The Way I Love Her has a punchier attack more akin to later Paisley Underground bands such as The Long Ryders.

Although it’s over far too soon, the EP is a tremendous listen. With Christmas coming up it’s a perfect alternative (and almost the same price these days) as a charity festive greetings card. All proceeds from sales will go to Marie Curie. You can download the EP here but there is also a limited edition 10″ vinyl disc available here.