Now living in Portland, Oregon, Fernando Viciconte was born in Argentina but moved with his family to LA at an early age. In his teens he played the local LA scene in a band called Monkey Paw before launching a solo career in the mid 1990s. With a series of critically acclaimed albums under his belt he released what many consider to be a highpoint, Leave The Radio On, in 2010 with contributions from the likes of Peter Buck and Scott McCaughey and  members of Richmond Fontaine. Dogged by ill health for several years, nevertheless Viciconte toured the UK and Ireland on several occasions a few years back, receiving rave notices and building up a fan base here. Traitors Table, a much more stripped back affair than Leave The Radio On, is sure to build on the goodwill and affection gained  on those tours, its surefooted mix of garage rock, psychedelia and power pop driving an album brimful of anger.

Like Alejandro Escovedo, Viciconte is an immigrant in the US and of course, in this day and age that’s not a comfortable position. While Escovido used an entire album to address this, Viciconte dots his thoughts here and there throughout Traitor’s Table but when he tackles it it’s with a sense of bile and fury. He goes for the jugular from the start with the galloping bass and drums of Division Lines, a song which screams of injustice and berates the powers that be who see unity as a crime and seek to divide us. As Viciconte sneers the words the enemy he reminds one of Joe Strummer who would also sneer at the NME while the vicious descending melody recalls some of Syd Barrett’s work with Pink Floyd such as on Vegetable Man and Interstellar Overdrive. No Deal rumbles into view with an attitude. To a sluggish, almost power trio workout backing Viciconte gets all apocalyptic on us singing about eliminating the candidate – “He’s not real,” as, “Armies are gathering serving a wicked king, so kneel.” Sung from the perspective of a sniper who, in an act of murder, is actually serving good, this is powerful stuff. On a more personal note, Viciconte delves into his own history as an immigrant on I Don’t Know with the telling lines, “I was brought here as a child By no fault of my own I was warned to keep my mouth shut So no one could ever know I couldn’t speak the language So I started to sing. I guess that I needed the attention And all the love that it brings.” Fittingly, he delivers this  as if he were fronting The Psychedelic Furs, one of the bands presumably who caught his attention when he began his musical career.

Finally, Viciconte closes the album with Turned Away, initially a straightforward acoustic guitar based ballad, the lines, “Are you hearing voices that whisper in your ear? Are you waiting for the chance to make them disappear?” are chillingly reminiscent of pogroms over the centuries. Mid way through, the song erupts in a chaos of squalling electric guitars and feedback, an aural equivalent of Max Ernst’s painting, Europe After The Rain.

Reining in the terror, Viciconte allows the album some prettier moments, reminding one that he is a master of melody. There are echoes of The Beatles on The Company  and on Is This Normal, the former a loveable piano led jaunt, the latter much more psychedelic in a Tomorrow Never Knows way, amplified by the insertion of vintage reportage of an “ordinary” housewife taking LSD for a research study in the black and white 1950s. Quite astounding.  Next up there’s the pumping power pop of The Longest Wait , an exquisite love song regarding a pair dreaming of the good life in Hey Darlene and then a pair of  dreamlike acoustic meanderings in These Are The Days and Thirsty Man, both quite intoxicating.

Recorded by Viciconte and his long time buddy, Luther Russell in a shack on a four-track recorder in a week long burst of activity, Traitors Table is an audacious album. An iron glove in a velvet fist, it draws you in as it daintily displays its melodies and then hits you with some fearsome realities. Definitely an album to have. 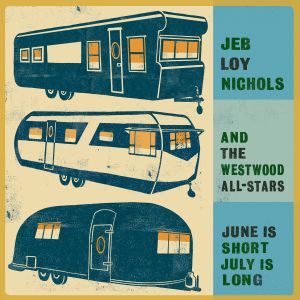 “Ready now? Just keep it simple.” So says Jeb Loy Nichols to his band on the very brief opening Intro to June Is Short, July Is Long, an album which is a sun dappled slice of blue eyed soul and a balm to the ears. Nichols, a southern American expat who has made his home in the rolling hills of Wales, certainly believes in this mantra. There are no bells and whistles on the 11 songs gathered here as they were originally recorded as demos by him and his local band of All-Stars, all local Welsh chaps. Listening back to the songs, Nichols realised they were perfect just as they were and so, with some horn section overdubs added, here they are for our delectation.

While Nichols has had a longstanding association with UK reggae and dub his first love was soul music from the southern American states and many of the songs here reflect this. However he works from a broad palette and as such the album throws up comparisons to artists such as The Rascals, Ry Cooder, The Meters and Ben Sidran. Ultimately, the groove is the essence as the band, keeping it simple, vary from laid back funk, jazzy licks and blissful country vibes as Nichols’ engagingly wearied voice slips comfortably into the songs.

Mellow is the watchword as the album slips along. You Got It Wrong opens with a slight rumble before settling into a classy, almost lounge like, horn fuelled slice of soul adorned with a female chorus. Think I’m Going To Fall In Love Today is funkier in a honeysuckle sort of way sounding like a deep soul cut from the early sixties while Matter Of Fact is stripped down somewhat reminding one of Curtis Mayfield’s work with The Impressions. There are some more energetic moments here as on Last Train Home which rides on a zippy rhythm guitar riff while Black Rooster has the sort of loose limbed blend of funk and country exemplified by Little Feat. Best of all is the excellent How Can A Man (Live Without his Mother). Set to a lonesome harmonica wailing over a shimmering wave of guitar and percussion it’s a song which could easily have sat on a Ry Cooder album. Simply superb. 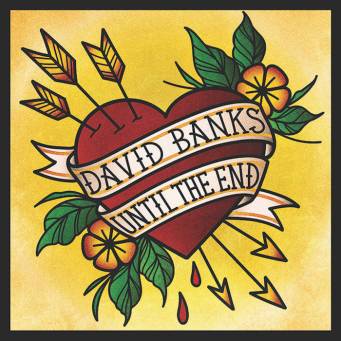 David Banks was a member of The Whybirds who flew the flag for UK Americana until they called it a day in 2017. A band composed of talented writers and singers, it was only to be expected that we’d hear more from the members and drummer, Luke Tuchscherer, was first out of the traps with three excellent albums to his name. Now, Banks steps up to the plate with an album engorged with glorious guitar flourishes which straddles the chiming world of power pop and gliding country rock. With Tuchscherer in the drum seat, Banks and producer David Corney provide the myriad guitars, keyboards, mandolin and Dobro, the trio sounding much larger than one would expect.

Someone To Lean On launches the album with a joyous rush of guitar charged rock which has the energy and immediate rush of Tom Petty’s American Girl and it’s Petty along with other stalwarts such as Big Star who are brought to mind as the disc plays on. Call Me Up has big brash chords and California harmonies while I Think I’m Gonna Be OK buzzes with the energetic fizz which characterised the Long Ryders in their heyday. Putting the flash bang wallop to one side there are some mellower numbers including Apologies From Sun St. and You Never Knew, both in the vein of Big Star’s Thirteen while The Best Of Me is the best Eagles song never recorded by the Eagles (back in the days when Jackson Browne was writing their hits).

It’s easy to toss around all these names and while the influences are undoubtedly, there Banks is no mere copyist. He captures the sounds and, importantly, the vibrancy, which informs the artists we’ve mentioned and pours out some grand songs, much in the way that Bennett Wilson Poole did last year. Have a listen to the closing title song and see if you are not bowled over.

Here’s the brand new video from Glasgow based “newgrass folk” band, Quick. Never Heard A Voice Like Yours Before is the first song to be released by the band since the 2017 release of their debut album This I Know. Since then the band have played at Celtic Connections, KIng Tuts Wah Wah Hut, the BBC’s Edinburgh Festival Fringe, Eden Festival, Belladrum Tartan Heart Festival and the Country to Country Festival.

The video was directed by BAFTA award winner Tim Courtney and the song is available from Holy Smokes Records.