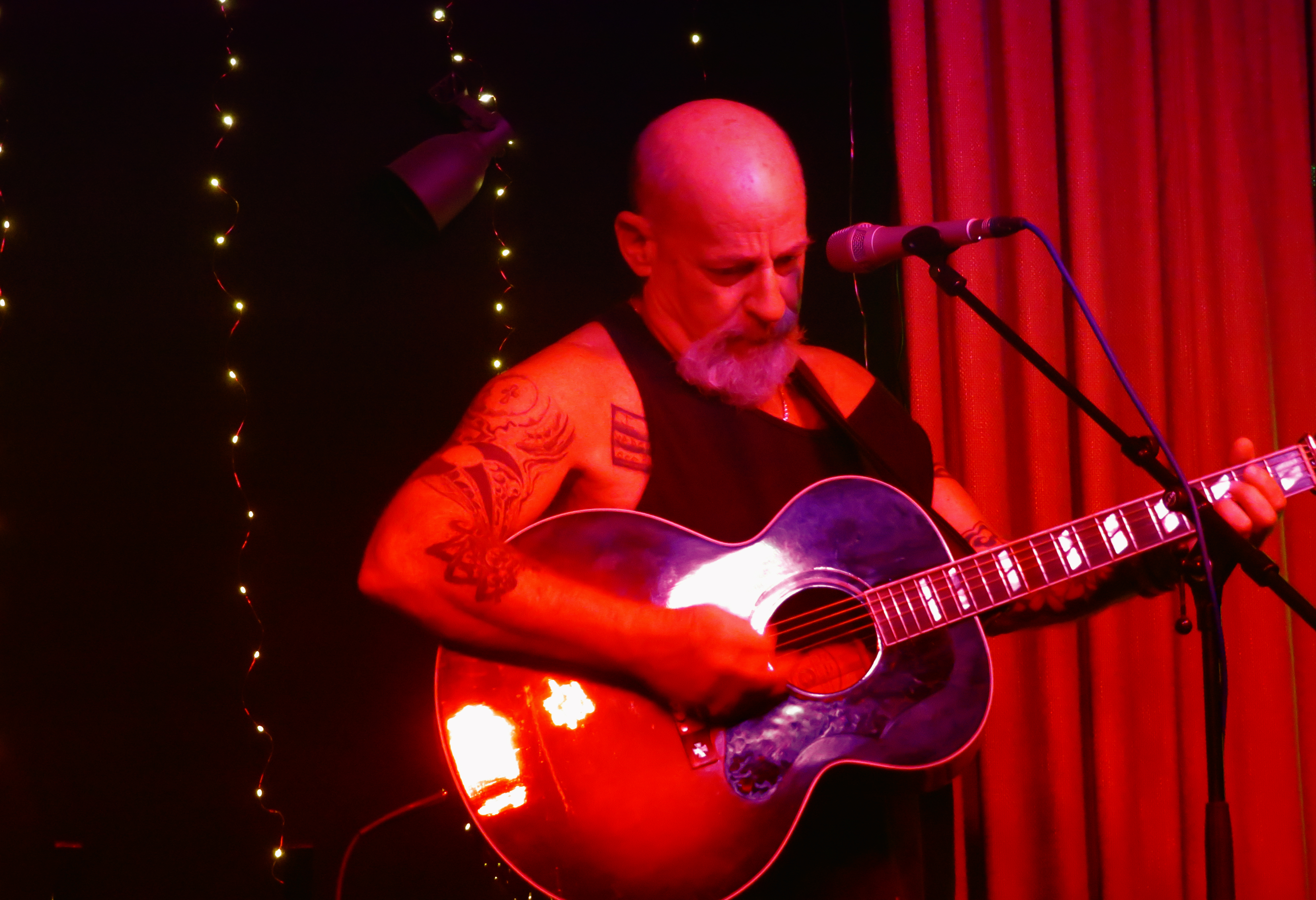 Well, here it was, our first live gig since March of 2020. Trepidatious yet somewhat excited,  our loins were girded. Double vaxxed and with a negative test result safely nestled on the smartphone, a short bus trip (another first!) allowed us to check in to Glasgow’s Glad Cafe (via an app) and, suitably masked, head to the bar. What a palaver. However, if that’s what it takes to keep us safe then so be it. At least there would be someone on a stage, with a guitar, and singing. And so it was.

This was only the second show put on by the Glad Cafe and only the fourth promoted by Glasgow’s Fallen Angels Club since restrictions were loosened, so everyone’s kind of dipping their toes in the water right now. Never mind that a few miles down the road, several thousand folk were tripping at TRNSMT, they’re young and invincible (hopefully). In the confines of The Glad Cafe, those of us less invincible were well looked after with mask rules gently applied (I went to the bar at one point for a quick look at the tap beers on offer and was rebuked by the barmaid as this five second reconnaissance mission was unmasked). The long and short of it is that this was a most enjoyable night, the music grand, the audience mindful (and for most of them this was also their first outing) and the venue quite brilliant.

If anyone was still feeling anxious they would surely have been calmed by the soothing sounds delivered by the opening act, Our Man In The Field. Their debut album, The Company Of Strangers was an engaging collection of country rock flavoured songs which packed quite an emotional heft while gliding smoothly into the ether. It’s a slimmed down duo who are accompanying the headliner, Jerry Joseph, on this tour but Alex Ellis, frontman, vocalist and writer, and Henry Senior, on Dobro and pedal steel are more than capable of transporting those songs into a live setting. Ellis’s voice is mellifluous and Senior’s contributions are, at times, quite removed  from simply adding pedal steel licks or Dobro slides to the show. On many of the songs Senior was using his instruments to provide ambient shimmering sounds, a glowing bedrock for Ellis’ fine songs.

Setting the scene for the night, Ellis explained the genesis of several of his songs. Easy Going Smile, for example, is his riposte to John Denver’s Leaving On A Jet Plane, a bittersweet favourite song of his mother. Renditions of this along with Thin (I Used To Be Bullet Proof), Don’t Speak and It Was Ever So reminded one of how good the album is and were gamely reproduced by the duo. Held hostage by that pesky pandemic, Ellis has a slew of new songs and plans to record them soon and we were treated to a few tonight. Go Easy was dedicated to London’s Betsy Trotwood venue while The Road was an intricate exploration of foibles. Come Back To Me was described as a “lockdown” song written when Ellis had to decide whether to hide out or help when the curtains closed on all of us. The new songs bode well for the next album.

Jerry Joseph’s The Beautiful Madness was one of our favourite albums of 2020. It opened a door into the quite incredible world which Joseph inhabits, with a slew of albums behind him alongside a globe spanning crusade to reach out to war torn refugees, to spread music and hope amongst them. Having The Drive By Truckers as your backing band and Patterson Hood in the producer’s seat does help lift one’s career and Joseph is the first to admit this. He’s toured here before but never got the attention now being lavished on him.

That attention is well deserved. He’s flying solo on this tour (apparently Henry Senior has joined him on a couple of songs on the tour but not tonight) and he’s quite a revelation. From the off he’s brimful of energy, a coiled spring primed to unleash, a force of nature as several others have noted. He’s raw and unadulterated, his guitar is thrashed by the second song as a string snaps as if insulted or scared by his presence. The sense that Joseph is kind of like an amalgam of Joseph Conrad and Warren Zevon with a shitload of Sam Peckinpah images in their baggage was immediately summoned as he opened with War At The End Of The World, a song inspired by a Mario Vargas Llosa novel. It’s a powerful song, screaming with vivid images and it sets the scene for much of what was to follow.

It was an exhilarating ride as Joseph sang songs inspired by treks into some of the world’s most dangerous locations. The killing fields of Mexico’s cartels and the war wracked bone towers of Iraq featured as the songs piled on, with Joseph’s introductions at times quite chilling although leavened with a fantastic course humour. Much of the album featured with Days Of Heaven quite anthemic in a Springsteen sort of way, and San Acacia a riveting commentary on the murderous border towns in Mexico. (I’m In Love With) Hyrum Black – described as a sort of Mormon cowboy outlaw song- came across as light relief in comparison. A couple of older songs rang out. Ten Killer Fairies, a song written in the knowledge that Joseph’s addictions meant his coins were going towards someone in a cartel who was saving up for his next yacht rang clear as a bell with a Dylan like honesty. And then there was Wisconsin Death Trip, a glorious song and delivered perfectly to a somewhat gob smacked audience as Joseph totally commanded all attention. Quite brilliant and a perfect reintroduction to the magic of live music.