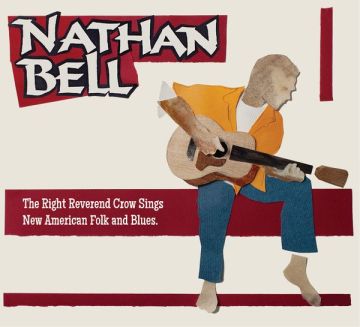 Taking some time out from his superlative run of Family Man themed albums which salute the American dream and excoriate the mess it’s become, Nathan Bell has taken a feather from Hank Williams’ cap for this eight-song disc. Williams adopted the pseudonym, Luke The Drifter, for a series of songs which were not his usual honky tonk jukebox fare. In a similar manner, Bell becomes The Right Reverend Crow as he indulges his love of country blues and folk.

He opens with a tribute to that irascible Texas bluesman, Lightnin’ Hopkins, the subject of one of Bell’s usual on stage interludes. Retread Cadillac (Lightnin’) copies Hopkins spooky spoken word style along with his slyly brilliant walking blues guitar as Bell offers a condensed history of Hopkins’ career. Another Texas bluesman, Johnny Winters, features next as Bell delivers a magisterial solo performance on a series of vignettes all ending with him driving down the highway as Johnny Winter plays the blues. There’s some grand piedmont guitar picking on the jaunty New Cocaine Blues while Rolling Blues mucks around in early Muddy Waters before he became all electrified.

Bell’s on more familiar territory as he moves on to the folk side of the Right Reverend, the songs here not dissimilar to those which have seen him mentioned as a worthy successor to Guthrie, Van Zandt and Springsteen. Poisonous Snake inhabits the weird world of Pentecostal snake handling with Bell delivering it in true southern gothic style as if he were singing a short story from Donald Ray Pollack. The Ballad Of Bill Spaceman Lee has some Dylan like harmonica rasping from Bell on a song which has classic stamped all over it with its capture of youthful aspirations and their eventual dimming. The album closes with a retread of The Big Old American Dream, originally released on  Love>Fear which serves to remind us that Bell can write a grand narrative in the grand tradition of writers such as Guy Clark and imbue it with a true sense of from the ground up nobility.

Nathan Bell hits the ground running this week for a short trip around the UK and an appearance at Rambling Roots Festival in Utrecht. We shouldn’t need to say that if you are anywhere in the vicinity of a gig then you should go as you’ll be blown away. In addition, Bell will have the first copies of The Right Reverend Crow Sings New American Folk and Blues on sale at the shows along with a very limited edition 7” single featuring two new songs, Heavy As A Talent (Billy Shakespeares’s Blues) and
To Each Of Us (A Shadow).