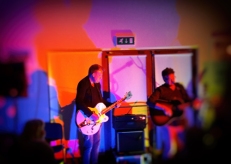 A dismal damp Sunday night in leafy Jordanhill, a wee bit off of the beaten track for Glasgow rock’n’roll but testament to the night’s players and the reputation of Sounds In The Suburbs that a fair crew turned up tonight almost filling the room. By day a douce clubhouse for post tennis or bowls drinks Woodend Bowling and Tennis Club doubles up as a warm and intimate setting for a musical evening and as such has hosted events for several years arranged by promoters Sounds In The Suburbs. It’s a measure of Blabber’n’Smoke’s general inertia that this was our first venture here despite a previous roster of highly acclaimed acts appearing so off we went, transport no problem with a rail station just around the corner, for what turned out to be a highly entertaining night.

Jeff Finlin is yet another one of these jobbing musicians who have skirted around fame (songs on telly shows and such) but ultimately remain just under the radar. Like so many of his peers Finlin is a master craftsman, a songwriter of note and talented performer with a back catalogue that rewards any investigation. His touring buddy Clive Barnes is an Irishman who may have sold his soul to the Devil at some desolate crossroad in the Emerald Isle given his mastery of blues guitar. Indeed he was awarded album of the year by the American publication Acoustic Guitar some years back, a fact he worked into a fine joke tonight. For tonight Barnes played electric guitar foil to Finlin’s thoughtful and provoking songs along with a solo slot mid show.

Opening with Walking On Air (from the excellent My Moby Dick), a bluesy affair with Barnes adding some crunchy notes on a beautiful Gretsch White Falcon, Finlin delivered a set of swampy rock, folky narratives and yearning ballads. His voice had an element of Southern cool that at times recalled a mix of Sal Valentino (of The Beau Brummels and Stoneground) and Randy Newman with Postcard From Topeka perhaps the best example tonight of his ability to summon up that mid seventies ennui, the slightly blissed out LA smog and coke ridden country rock of the times. Songs such as The Perfect mark Of Cain, The Long Lonesome Death Of The Travelling Man and I Killed Myself Last Night allowed Finlin to stake his claim as a writer of note while Barnes coaxed and teased his guitar with some blistering solos while able to sweeten the songs sounding almost like a pedal steel at times. There was some boogie on the highway riproar of Jesus Was A Motorcycle Man while Sunday’s Forgiving came across as a brethren to Kris Kristofferson’s Sunday Morning Coming Down. What’s The Big Idea, originally penned for George Bush was tonight aimed at the 45th resident of The White House with Finlin acknowledging that he’d be happy these days to find Bush back at 1600 Pennsylvania Avenue. Finlin closed the show with a solo rendition of Alchemy which sounded tonight as if it were an outtake from Dylan’s Blood On The Tracks, a bittersweet song of romance and regret.

Barnes was a revelation in his short mid set solo slot as he mesmerised the audience with his superb lap steel playing summoning up the ghost of folk blues along with some supremely entertaining anecdotes. His list of dubious American place names along with his misadventures via his Hobbit of a booking manager in the States was hilarious. Above all however he showed that he’s up there with the likes of Taj Mahal and Eric Bibbs in terms of acoustic blues playing.