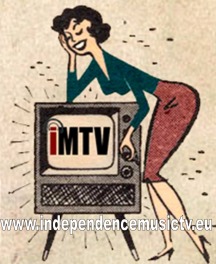 How best to support your favourite acts and artists? I’m sure that Blabber’n’Smoke readers do more than their fair share, buying records, going to gigs, funding Kickstarters and such.  Now music promoter Rob Ellen, who is based in the Highlands, has a new concept which he announced on July 4th, Independence Day of course for those in The States.

To call Rob a music promoter is to sell him short. His Medicine Show umbrella covers all sorts of activity. He promotes artists, organises tours and house concerts, has a syndicated radio show and an online webzine carrying album and live concert reviews. In addition, he is one-half of The Slim Panatellas playing tea chest bass with cigar box guitar genius Don Jack. Now Rob has set out on perhaps his most ambitious project, iMTV, an innovative attempt to showcase music, offer folk an opportunity to become a patron and hopefully put some money into the pockets of the featured artists. It’s fully explained on his website but essentially Rob is setting up a music video channel which will carry music content such as tour documentaries, streamed concerts and the like, all unique and filmed and recorded by Rob. To facilitate this he has vowed to spend the next year touring the UK converted Hymer Mercedes motor home which is now a mobile TV studio, The Medicine Music Moose Mobile. 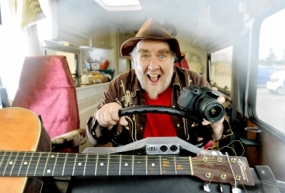 It’s early days. The 4th July declaration was the curtain raiser for a fund raising drive asking for a minimum £10 donation for a year’s subscription to iMTV once it’s up and running. In addition musicians will have a members page on the iMTV site and will receive 50% of  subsequent subscriptions made through their page. The initial fund raising page is here. It’s a bold venture so Blabber’n’Smoke spoke to Rob about the idea, his hopes and expectations and we started by asking him why he was doing this.

It’s a couple of things. I got frustrated sending out my artists’ CDs to DJ’s and writers. Many of them are good enough to play some songs or write about the music but it’s getting harder and harder to establish an artist, it’s the same worthy crew who play the songs. There’s a lot of resources thrown into trying to get on the radio and I thought, well why not set up a TV station?  If we can attract people to that it will be a whole lot better than just one or two radio shows playing the music. And I also wanted to come up with a plan that can reward the artists themselves, affiliated artists will get 50% of any profits that come in.

Why do you think a TV concept will be more effective than a radio play?

I think that if you offer music in a video in these days of instant interaction then people will be more likely to remember it. I want to capture a moment and then share it with people on the video channel and also via social media.

You’ve got a mobile TV studio which you’ll be using to record shows and events.

Yes, I’m out on the road right now, I’ll be doing this for the next year, collecting content, spreading awareness and trying to raise the funds we need. So the Moose mobile will touring the country, filming and recording and we’ll be trying out the results initially on the House Concert TV channel.

I’ve given myself a year to see if we can get fully funded to see if we can do it properly. There’s a fundraising page which has started off really well but I need to keep up the momentum. So far it’s mostly folk I know that have contributed but I’m hoping that word will spread. I hope that people will see it as an investment of sorts, it’s only £10 I’m looking for and for that tenner anyone who contributes might eventually make some money if it all works out.

So what’s the current state of play with you on the road?

Right now I’m on the road with Chuck Hawthorne who’s on his first tour of the UK. He’s playing gigs, house concerts and festivals and I’m recording and filming all of it. I’m also going to try some live streams directly from the Moose mobile which will go on to Facebook, we’ll call it Chuck in the truck! It’s great to be starting off with Chuck as he’s got such an interesting back-story and hopefully we’ll get some footage of him recounting it and it will all go up on the Moose Mobile Facebook page. At the end of the tour I’m hoping to edit what we’ve got into a documentary. I think that Chuck is as important an artist as I’ve worked with for a long while and also it will be nice to get a capture of the current UK Americana scene as seen through his eyes.

Will you plan to do more documentaries once iMTV is up and running?

I think it will be more live streams, bang, bang, as it happens, captured warts and all allowing you to interact with the artist as it happens and then archived so that you can revisit it, share it and such. As the project progresses I’m hoping to install cameras in a couple of our regular concert spaces which will allow us to edit some concerts afterwards for a really professional showpiece which will be available to watch time and again.

So at the moment we are trying it out, getting to know the equipment and seeing what we can with it so that when iMTV is good to go we will be up and running from day one.  It’s a steep learning curve but I’ve got a team of folk back home helping me set it up.  This time next year we hope to have enough money to man it all and to entertain a target of 60,000 subscribers.

So if you want to get in on the ground floor you can send in your tenner to Rob’s Go Fund Me page. In addition it would be a tremendous help if folk can share this using the links we’ve included or by just sharing and mentioning this page. It’s a vision we can all participate in after all.