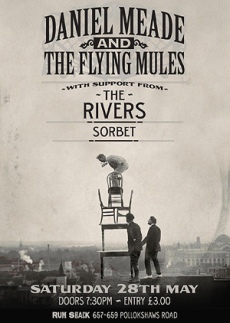 Lady Luck’s been smiling on Glaswegian Daniel Meade, either that or several years of hard graft is paying off as his song writing skills and musicianship are making waves well beyond his hometown. Following rave reviews for his independently released and Nashville recorded album, Keep Right Away, at the beginning of 2015 and support slots with artists such as Sturgill Simpson, Pokey LaFarge, Diana Jones and Old Crow Medicine Show Meade was signed to the well respected UK label At The Helm Records (joining an illustrious roster that includes Brent Best, John Moreland, Austin Lucas and Good Luck Mountain) earlier this year. The first fruit of this union, Let Me Off At The Bottom was released last week with some very positive press reviews in the run up to the day and the weekend saw Meade and his band The Flying Mules launch the album in fine style in Glasgow’s South Side.

Let Me Off At The Bottom is Meade’s third official release and the first to feature the band. Recorded in Glasgow (with mixing done by Morgan Jahnig in Tennessee) it’s a fine capture of the raucous hillbilly rock’n’roll and honky tonk country that Meade and The Mules (Lloyd Reid – guitar, Mark Ferrie – double bass, Thomas Sutherland – drums) excel in. Meade’s songs drink from the well of Hank Williams and Jerry Lee Lewis (among others) and The Mules (who have notched up several hundred gigs over the past two years) are a well oiled music machine (not in the sense of well drunk). Their recent stint at The Kilkenny Roots festival in Ireland (five gigs in four days) is a contender for the festival highlight. 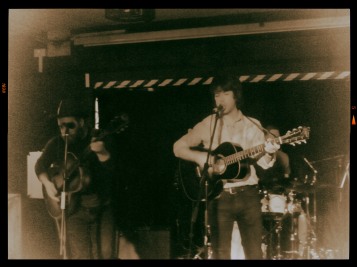 Anyway, a capacity crowd turned up for the album launch. A good number were aware of the band but the audience was swelled by the show’s inclusion in Glasgow’s South Side Fringe Festival. This allowed the opportunity to see several folk, who before the band came on ask what sort of music they played,  pretty soon get up and join the party. And a party is what is was, the band in great form, the music infectious and impossible not to sit still for. There’s a great deal of nuance in Meade’s songs but live it’s much more primal as they cram sixty years of folk, blues, country and rock’n’roll into the set. With a batch of songs from the new album and some favourites from his back catalogue Mead and the band certainly ripped the joint. 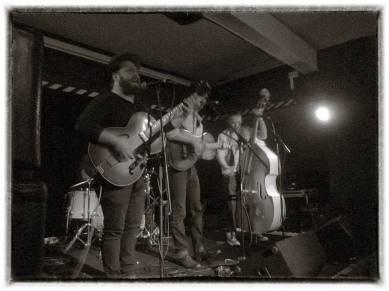 The band ripped into the opening trio of songs, Back To Hell, Not My Heart Again and There’s a Headstone Where Her Heart Used To Be creating an instant buzz before Meade sang the plaintive He Should Have Been Mine, a switch in mood but one which had the audience captivated. As far as I recall this was the only ballad of the night, the remainder being full blown rockabilly rock although the occasional country lope hove into view. With no  piano to hand Meade stuck to guitar for the night, showing some fine picking skills on Lock Up Your Daughters, a song which also included fine breaks from guitarist Lloyd Reid and bassist Mark Ferrie. Please Louise is a definite crowd pleaser, the bawdy lyrics going down a bomb, the girls at the front checking that it wasn’t their big behind Meade was singing about. If It’s Not Your Fault (I Guess It’s Mine) showed off the band dynamics starting off as a skifflish railroad beat before picking up steam. By the end there were dancers at the front and the back of the crowd (more space there to jitterbug I presume) and there was a definite (and justifiable) swagger about the band as they launched into Long Gone Wrong, a song that just about sums them up with its Sun Records rhythm and harmonies along with Meade’s lyrics that nail the travelling musician’s life. The set ended they offered one more song, a fine rendition of Sonny Terry’s Hooray, Hooray, a fine end to the night.

There was an opening set for the evening from Sorbet, a guitar/bass/drum trio who ventured into the avant-garde as they responded to a backdrop of films which included the first two parts of Jean Cocteau’s Le Sang d’un Poète. They were followed by guitar/drums duo The Rivers who describe themselves as “country grunge”.  An exciting pair with jangled guitar and frantic percussion there was a Buzzcocks like rush to a song that I think was called your Love Is On My Side while their new single, Nine Miles High is worth checking out.