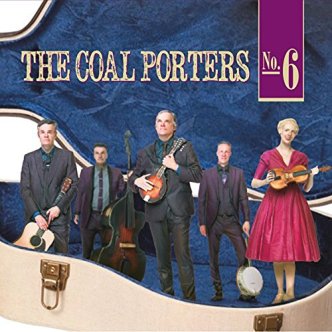 Only yesterday Sid Griffin, erstwhile founder of The Coal Porters was anointed a cult hero by The Guardian for his role in alt country pioneers The Long Ryders. Problem with cult heroes is that, by definition, they are relatively unknown, often long gone before cult status is bestowed on them. No such problem with Mr. Griffin as not only is he alive and kicking he’s barnstorming across the country with his “alt bluegrass” band The Coal Porters who are now in their 25th year, originally following the Ryders’ country rock path before entering the 21st century as an all acoustic band.

No. 6 is the sixth album from the acoustic Porters and it’s important to emphasise that while Griffin might be the “name” here the band are a truly democratic collective with song writing and singing duties shared between Griffin, guitarist Neil Robert Heard and Fiddler Kerenza Peacock. Produced by folk rock legend John Wood (who has worked with Fairport Convention, Nick Drake, John Martyn and Beth Orton) the ten songs here see the band working within their bluegrass base while including folk, country and even 80s’ type indie romanticism.

Herd’s Songs are muscular and earthy. Save Me From the Storm is a clever amalgamation of sea faring folk song and spiritual call and response with the Porters’ dynamic soloing mid song quite invigorating. Unhappy Anywhere ripples along finely with a Celtic lilt and morose lyrics, Herd in a Hibernian existentialist mood. Meanwhile The Old Style Prison Break is a keen examination of cowboy movie staples delivered with a shit kicking front porch jollity.

Ms. Peacock offers up the instrumental Chopping the Garlic, a showcase for her fiddle playing with the band not playing second fiddle, banjo player Paul Fitzgerald and bassist Andrew Stafford getting the chance to shine along with Griffin on mandolin and Herd on guitar. They certainly zip along and the coda is cool. She then sings on Play A Tune (apparently her first vocal performance) and it’s a much more mannered song than its siblings. Her high, almost breathless vocals and fiddle allusions to The Lark Ascending are miles from normal Porters fare but it’s a very personal song, a tribute to her mother and its wonderful performance reminiscent of acts like The Raincoats and Virginia Astley.

Your man Griffin turns in his usual high calibre efforts. He strolls effortlessly through the jaunty Salad Days, a witty quickstep recalling his brush with fame while Train No. 10-0-5 is classic story telling with Fitzgerald’s banjo well to the fore before Peacock goes all Scarlet Rivera. He tops this with the sublime The Blind Bartender, a song that’s loaded with Peckinpah border drama heightened by the soaring trumpet solo from Cuban Eikel Venegas which transports the song into a dusty cantina. Wonderful.

We need to mention the closing song. A fine Coal Porters reclamation of The Only Ones’ Another Girl Another Planet, bound to be a sing-along at their gigs and then there’s Griffin’s opening gambit, his bluegrass tribute to the Ramones on The Day The Last Ramone Died. No stranger to rock’n’roll history Griffin here takes the tragic fact that all four bros are gone and forges an excellent tribute to them. His memories of seeing the band, donning his leather jacket when he heard of Tommy going, his aside regarding the ubiquity of the tee shirt are delivered energetically and I’m pretty sure that when they play this live it will give the audiences one more chance to yell, “Gabba gabba hey.”