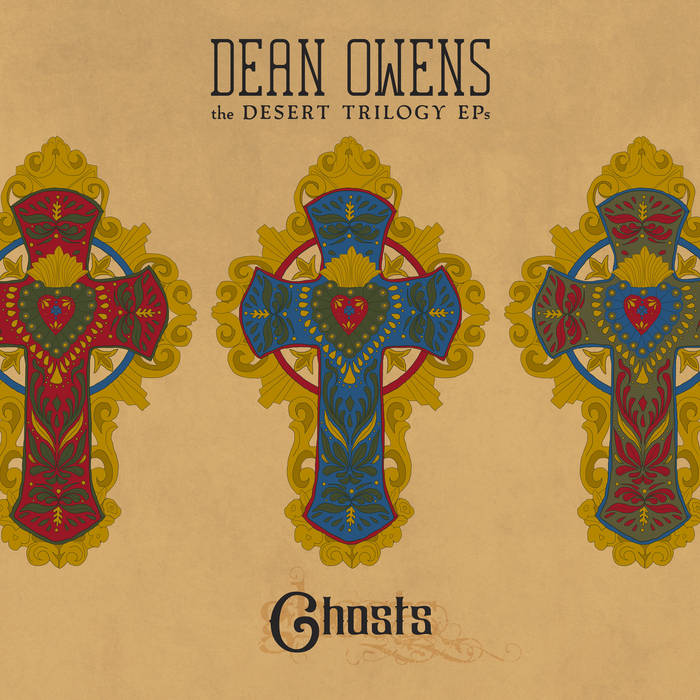 All good things must come to an end and so it happens that Ghosts is the final piece to be slotted into Dean Owens’ Desert Trilogy slipcase. A quick recap. Having recorded an album, Sinner’s Shrine, with Calexico in Tucson, Owens’ plans for its release were scuppered by Covid. Undeterred, the Edinburgh based artist used his lockdown time to record another bunch of songs with various members of Calexico and other Tucson luminaries and he’s been releasing them via this highly desirable collection.

All the EPs have a song from the album but Owens was keen not to short-change his fans so, overall, they contain eight new songs, all cut from the same cloth which inspired the original recordings, Owens’ love of the American Southwest. So far there has been critical acclaim for this new direction and Ghosts is certain to bask in similar glory.

As with the other EPs, it’s a song from Sinner’s Shrine, which leads off. The Hopeless Ghosts is very much in the vein of Calexico’s hot, dusty and claustrophobic desert shuffles. John Convertino’s drumming is instantly recognisable as is Jacob Valenzuela’s soaring trumpet and Paul Niehaus weighs in with his swooning pedal steel. As Calexico do much of the time, Owens achieves a cinematic effect here with visions of movies by Leone and Peckinpah summoned by the music and the words – there’s drama by the dirtload. It’s haunting (as most songs with Ghosts in the title should be), as Owens comes across like some high plains drifter, condemned to forever travel. In a nice touch, Owens explains that the idea of hopeless ghosts comes from a Townes van Zandt description of his songs. Anyhow, the song is a towering achievement which is lifted further aloft when Grant-Lee Phillips joins Owens on harmony vocals, especially when the pair vocally pirouette towards the end of the song.

Mother Road is much more restrained as Owens delivers a wearied narrative, inspired by a 93 year old barber who had a shop on Route 66, a road now seldom travelled once the Interstate opened. It’s a sepia stained portrait of past times, replete with lonesome pedal steel and mournful trumpet and it’s a fine example of how Owens can transport his evocative portraits of his home town to a foreign land. Even When I’m Gone finds Owens on his own on a song which was recorded in Tucson but which was inspired by walks with his dog in the woods near Edinburgh. Again, there’s a sense of desolation here although it’s tempered by the thought that once we pass, life will go on. The EP ends with a murder ballad which Owens says he had written for Johnny Cash but, with the man in black gone, he has to sing himself. Owens recorded his basic track in Scotland with Kevin McGuire on double bass before Convertino, Martin Wenk, Tom Hagerman and Naim Amor sent in their contributions from various locations. Fittingly, as the last song on this trilogy, it’s called The End and, yes, one can imagine Cash singing it on one of his latter albums. Like some Dostoevskian anti-hero on the eve of his execution, Owens reflects and ruminates on a life of crime as a baleful trumpet and tasteful shards of guitar lead him towards the gallows. It’s a very impressive song.

So, trilogy wrapped up, all we can do is wait for Sinner’s Shrine. The main course after these wonderful appetizers.