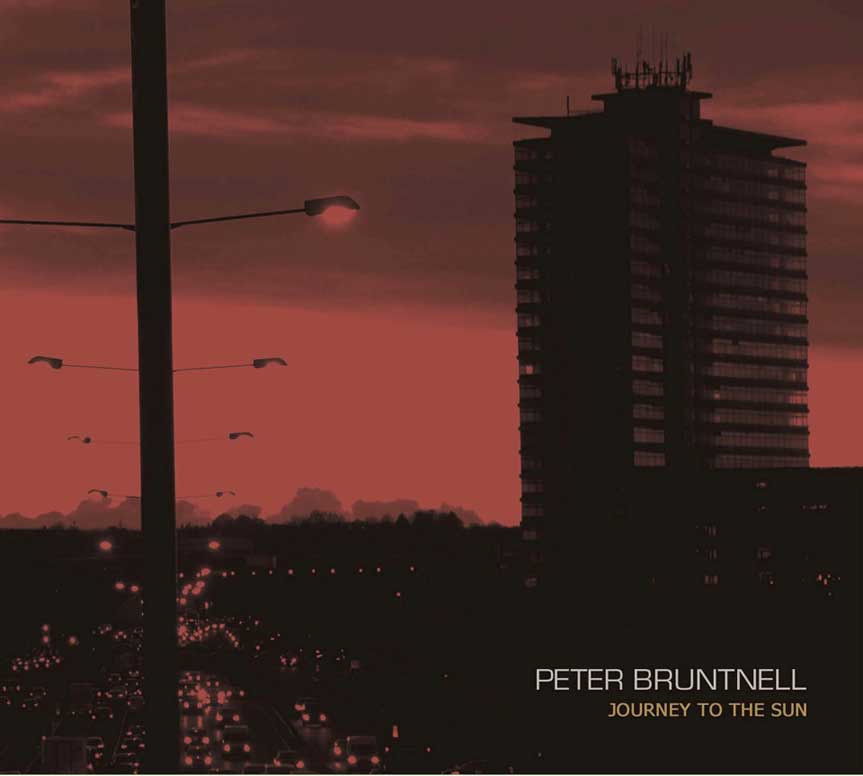 It’s getting to be ubiquitous to declare that an album under review is a “pandemic recording” but, so it goes, and Peter Bruntnell’s latest offering goes to show that he, along with several others, have certainly risen to the occasion. Journey To The Sun finds Bruntnell ensconced in his basement, a proud possessor of newly purchased accoutrements, namely, a bouzouki, a synthesiser and a drum machine – I mean, we’ve all been all over Amazon while locked up – and he employs these throughout. Aside from some vintage keyboard additions from Peter Linnane, transmitted from Boston, and pedal steel from Iain Sloan on one song, it’s a truly solo album.

The album certainly leans more to the melancholic side of Bruntnell as he casts aside his ability to produce star spangled rock’nroll. Having said that there are some jangled outings with Lucifer Morning Star featuring  a burbling synth bubbling along with Bruntnell’s guitar while Runaway Car is a rather glorious rush reminiscent  of Steve Stills or The Lemonheads. But, for the most part, the album is quite autumnal with echoes of Nick Drake here and there. The ebbs and flows of the opening song, Dandelion, from its stark acoustic opening (Bruntnell getting his money’s worth from that bouzouki) to the sombre bass and whispers of synthesiser which close it, sets the scene perfectly. Here, Bruntnell inverts what should be a bucolic summer scene, his whispered voice speaking of decay and death with legions of blindfolded angels surrounding him, high on a hill, as dandelions run wild. The song shares that odd mix of horror and blandness which can be found in some of the films of Ben Wheatley.

Bruntnell’s new synth and some lockdown listening to Brian Eno’s album, Another Green World, leads to him including two space age instrumentals into the mix. Both are short with The Antwerp Effect leaning to Philip Glass minimalism while Moon Committee finds Bruntnell  picking his guitar over a soft sonic bubble of sounds. The latter recalls the likes of Steve Hillage’s Rainbow Dome Musick and both are pleasant inclusions but when Bruntnell injects some synthesised sounds into several songs it gets more interesting. You’d Make A Great Widow heaves into view with dizzying sound effects before a robotic drum kicks in and the sound opens up to display a song which is quite quintessentially Bruntnell ,with echoes going all the way back to Normal For Bridgewater. Dharma Liar is also introduced with some synthetic squeaks and burbles before they retreat somewhat into the background allowing Bruntnell, Linnane and Sloan to deliver this gorgeous eight minute dreamlike confection. It’s the pinnacle of the album, a glorious song suffused with melancholy but quite uplifting with its shifting patterns and Brian Wilson like arrangement.

Elsewhere, Bruntnell delivers more of what we expect from him as on the luscious strum of Heart Of Straw which has a heart of political darkness within its lyrics. There’s a version of Wild Mountain Thyme which, given that it’s Bruntnell singing it, sits up there with the likes of The Byrds. But, given that he can deliver such a song as Merrion, a tale which could sit as easily on an archival collection of dustbowl blues as it could on an Uncle Tupelo album, it is a wee bit redundant. There’s some more soothing sonic soupçons along with weathered keyboards on Waiting For Clive, a fine slice of ennui, and the album closes with Bruntnell closeted within the wonderful confines of Mutha. It’s an elegy of sorts, a mournful farewell to a mother, given a wonderful kitchen sink scenario as he offers support and succour to the bereaved. It’s a hefty hump on which to close but Bruntnell, intentionally or not, here hits the button which can open the floodgates of oh, so many, who have lost loved ones in these pestilential times.

One thought on “Peter Bruntnell Journey To The Sun”