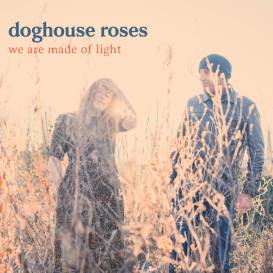 As winter beckons, it’s just the right time to draw the curtains, stoke the fire and listen to the comforting sounds of Doghouse Roses. One of Scotland’s most acclaimed pairings, Iona MacDonald and Paul Tasker excel in delivering songs which are intimate and warm, MacDonald’s honeyed voice and Tasker’s superb picking skills are just what you’d want to listen to in a perfect folk session in a perfect pub.

We Are Made Of Light, their fourth album, fits this bill just perfectly. While their previous album, Lost Is Not Losing, was a varied affair which even had some rockabilly on it, here the pair build on  the foundations of classic folk rock from years bygone, fitting as the album features several songs which have been in their repertoire for some years but never captured in the studio. Often compared to the likes of Sandy Denny era Fairport Convention along with other luminaries from that era, Doghouse Roses here grasp the bull by the horns and turn in an amazing album which utilises their affinity with those past times while remaining contemporary in much of their subject matter.

While much of the album features just the duo, there are dashes of keyboards, percussion and strings on several numbers. The opening song Low is a gently flowing ballad, garlanded with strings over a sturdy rhythm section with Tasker’s low harmonies buttressing MacDonald’s voice. It’s reminiscent of Richard and Linda Thompson which is no bad thing, sharing that pair’s sense of pathos. Arsenic, their take on climate change, is not only a clarion call regarding this all too important topic but it revisits the spirit of protest from the sixties with the song having a fine west coast vibe to it, a mixture of The Youngbloods and Jefferson Airplane. Their mood darkens on the edgy Why We Fight which is another protest song of sorts but delivered here in a more pugilistic mode, the violins darting and screeching throughout as MacDonald turns in a sterling vocal which, at times, hits the sardonic excellence of Grace Slick. This full band approach reaches its pinnacle on the epic The Reckoning, a glorious conglomeration of percussion and strings, hammering and sawing away, as Tasker frantically picks on his guitar.

Away from the Sturm und Drang of a song such as The Reckoning, MacDonald and Tasker discard the band trappings allowing them to shine as a duo. One More For The Road is loaded with regret and opportunities missed, that next drink never taken, MacDonald’s voice peerless as Tasker performs several excellent acoustic guitar solos. First Of April is a shimmering elegy to the men killed in an infamous helicopter crash off the shores of Aberdeen while Elegy For A Seaside Town, a delightful banjo fuelled outing, recalls the lost glories of a day out. Tasker’s banjo also features on the album’s most adventurous moment, The Fermi Paradox, a band number which has MacDonald singing of the lure of a beckoning light, a beacon for the displaced. As the song builds in its intensity, it morphs into a unique version of Fleetwood Mac’s Oh Well, a showcase for Tasker’s skills which is quite dramatic.

The album closes with a song which just about encapsulates the Doghouse Roses experience. All My Days glistens with Tasker’s guitars and MacDonald’s crystal voice. A bucolic number, it sums them up perfectly.

Doghouse Roses have an album launch show on Saturday at Glasgow’s CCA, details here, while they also play at Aberdeen’s The Blue Lamp this Friday.