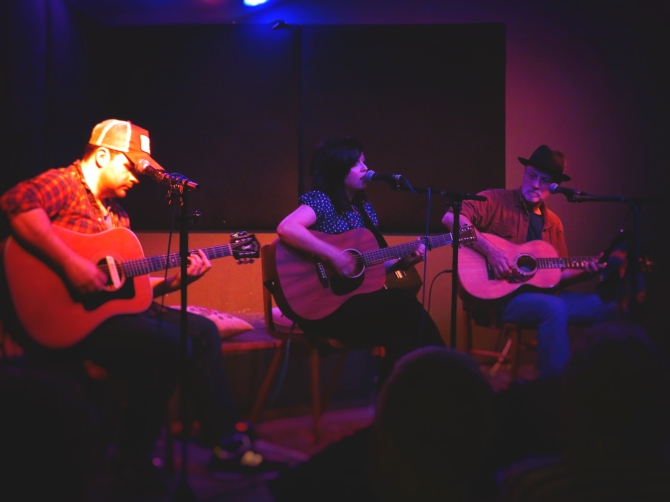 There was an undeniable sense of déjà vu around as this talented trio of singer songwriters reconvened for a night of storytelling and song singing,  almost exactly one year since they last appeared at The Glad Cafe. Aside from the three familiar faces onstage much of the audience seemed to have been at the last show and, on a night where Hayes Carll was also appearing in Glasgow, the trio pulled in a handsome crowd, filling the back room auditorium. 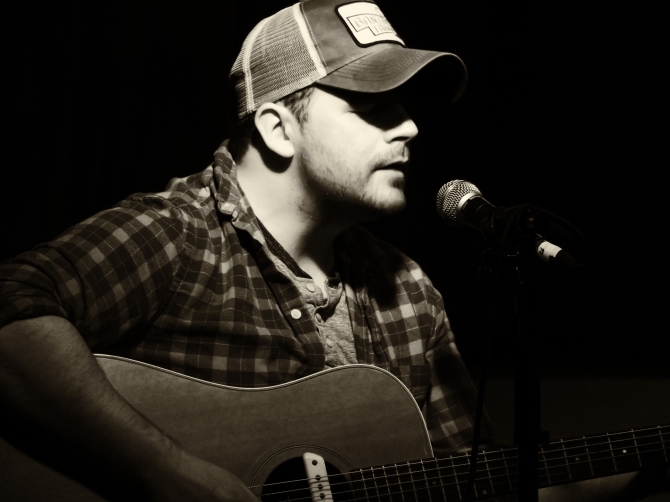 Playing “in the round,” each performer singing and then passing the baton on, the show was not however a retread of last year’s performance. Sure enough, some songs were repeated but a quick perusal of a review of last year’s performance showed that much of the evening was fresh and, with as much attention given to the dialogue preceding a performance (an essential element of a songwriters’ in the round experience), there were anecdotes and stories galore. So, aside from insights into their songs’ gestations from all three, we were given a glimpse into the “back stage” manoeuvrings which assist in setting up shows such as this with sound files flying over the Atlantic in advance allowing, for example, Ms. Healy to sing harmonies on a new song by Starr. There were also laughs in abundance throughout the night, most of them instigated through the droll humour of Shields although Healy gave as good as she got with the pair of them bickering in the best fashion of The Handsome family with Healy’s driving ability questioned. Shields also had the funniest story of the night when explaining why several expected audience members hadn’t turned up; note to self: check your Facebook privacy settings. Aside from that, the trio were in top form musically. Starr had just stepped off his ‘plane from Colorado the day before and had only sound checked with his Glasgow and Leith based collaborators that afternoon, the first time they had played in a year. While the roundtable presentation is suited for solo performances, each musician was able to join in on songs be it on vocal harmonies or adding guitar with Shields and Starr both taking solos on many of the songs of the night. Shields sang the excellent Boys In The Band from his most recent EP but also reminded us that he’s been ploughing a bittersweet strain of Americana for several years with renditions of Way Back When and Johanna. There was a pin drop silence in the room as he sang the lonesome Counting The Hours with Starr commenting at the end on how good a song it was. Healy featured several numbers from her highly acclaimed album, Keep The Flame Alight, with the title song and Falling In Love Again resonating with the audience who hung on to every word. Her mini melodrama, Woman With No Shame, was preceded by some sparring with Shields whose interpretation of the song”s protagonist differed somewhat from Healy’s. The song itself is a masterpiece of social observation. Starr, with no evidence of jet lag, proved again that he is well versed in the grand traditions of American song writing kicking off with the deep romance of Edge Of The World and then dedicating No Time Like The Present to his wife Cindy who was in the audience. He unveiled some new songs, one from an ongoing project based on a novel written by his grandfather, Fred Starr. The novel, Beauty And Ruin, is set in late nineteenth century Arkansas and Starr is collaborating with John Oates, Dana Cooper and Jim Lauderdale among others to produce an album based on the book and tonight we were introduced to the title song. Another collaboration with Oates is the song, Rise Up, written by Starr after a post -op “morphine dream” which featured his father and grandfather. It’s another swell song which has a hint of classic Laurel Canyon singer songwriter in its bones reminding one of JD Souther. The trio concluded their two hour set with a nod to one of the foremost singer songwriters of our time as they delivered a sublime rendition of John Prine’s Angel From Montgomery. A great ending, but the crowd were hooting and hollering for more so our three intrepid songsters huddled up before launching into the Eagles’ Take It Easy, Starr piloting with Shields and Healy as his wingmen. The crowd loved it.