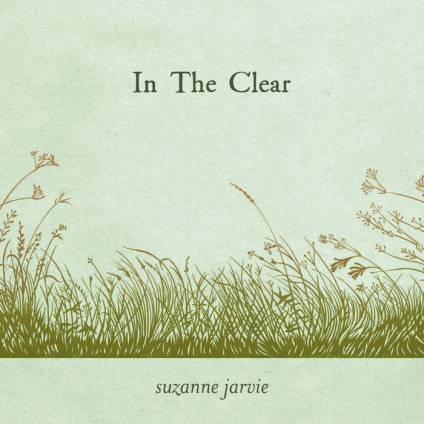 It was back in 2015 when Suzanne Jarvie, a mother and lawyer, released an excellent debut album, Spiral Road. The album was a wonderful collection of songs which recalled the early releases of Emmylou Harris with Jarvie writing in the wake of her eldest son’s trauma after a serious fall. Despite having only dabbled in music up to that point the incident unleashed a song writing genie within her which led to the album and then on to successful concert dates, often in the company of fellow Wolfe Island denizens such as Hadley McCall Theakston and Hugh Christopher Brown who produced this album.

In The Clear, as the title might suggest, continues to find Jarvie writing in the aftermath of her son’s brain injury with several of the songs dealing with the aftermath although she avoids autobiography, preferring imagery and allusion. Thus, the gritty Point Blank with its glowering guitar and film noir hard-boiled lyrics, was written apparently in response to her son’s mood swings while Headless Rider finds her imagining her daughter’s sense of displacement as her sibling lies stricken. It’s a wonderful song which comes across almost like a Larry McMurtry story in song and verse, the hint at a familial connection really is only available to anyone with access to the PR notes but armed with this knowledge it makes sense. Aside from that it’s just a fabulous song which Jarvie delivers with a sublime and sweet country vibe as the band flow wonderfully; acoustic guitars, pedal steel, mandolin, fiddle, banjo and keyboards all swarming together, Jarvie’s very own Hot Band.

For someone who professes to be relatively new at the game, Jarvie manages time and again to hit all the buttons. Her songs are crammed with words to the extent that they all read like short stories. Take for example You Shall Not Pass, another gritty number with soulful Hammond organ and southern stained guitar licks which comes across like an Appalachian version of Lord Of The Rings  and then there’s the dust bowl dirt stained The Core. Featuring the legendary Mickey Raphael on harmonica, The Core might be one of the best songs we’ve heard this year, certainly a song to rival the best of Gretchen Peters and her ilk. Jarvie reaches similar heights throughout the album. Martyoshka and One It Finds are somewhat muted with a slight hint of Joni Mitchell while the title song is perhaps the closest we get here to the Emmylou comparisons with its superb Dobro from Burke Carroll. Perhaps the nearest to autobiography is the delicate All In Place which has a tiptoeing mandolin rippling away as Jarvie sings “I can see you’re worried it’s alright, I’m worried too and I’ve been up all night, watching the wipers cross the glass, all the minutes thunder pass.” The words will reverberate with anyone who has been in waiting for news of a loved one but aside from that the song’s arrangement is just so good and the playing so excellent. Slightly bluegrass, slightly LA canyon, slightly perfect.

Jarvie’s muse may have been born from tragedy but, unleashed, it thrives and In The Clear is a magnificent collection of songs, perfectly sung and perfectly played.