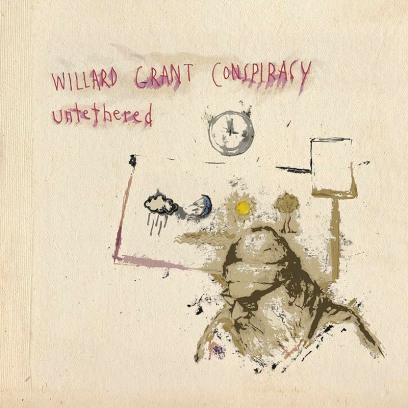 It’s impossible to listen to Untethered without a heavy heart, the album being the last recordings made by Willard Grant Conspiracy’s mainstay, Robert Fisher, before his death from cancer in 2017. Throughout their 25 plus years of recording Fisher and his ever-changing Willard Grant line-ups were always somewhat portentous, his sombre voice offering a spectral foreboding to many of his songs. Although the songs here were recorded after his diagnosis there’s only one written in the wake of it. Nevertheless, it’s difficult not to see the album as Fisher’s farewell to the world. The songs have been “dusted down and brought to life with the care and attention of his longtime compadre David Michael Curry” and Curry has certainly done a magnificent job as there’s no sense of this not being a finished product which would have accompanied the band on their next tour.

Most of the album is stark in its acoustic beauty, the one song which kicks against the prevailing mood being the opener, Hideous Beast, which snarls with bared teeth in a manner not unlike a feral Nick Cave. The remainder is a creaky voyage with viola and cello, a musical saw and occasional guttural guitars driving the songs over laid back rhythms. None more so than on Do No Harm (with Steve Wynn on guitar) as Fisher seems to gather euphemisms for passing on and refers to the titular medical oath as the song progresses as if Charon was piloting the band across the Styx. There’s a tremulous tenebrosity in the saw and sawed instruments of All We Have Left, an instrumental which recalls the melancholy of Nick Drake and the solemn quality of an elegy. It’s a quality the album returns to over its course with  Let The Storm Be Your Pilot casting Fisher in a vulnerable position, his voice lowered to a whisper as guitars slither and squirm while I Could Not almost weeps with a list of unfulfilled ambitions, its ramshackle structure as frail as a dust bowl shack as the storms gather. Untethered, written post diagnosis, recalls Johnny Cash’s glorious bowing out on songs such as Hurt as Fisher delves into portents of death while the closing Trail’s End, another instrumental, comes across as if it were a soundtrack for an apocalyptic Western movie, Morricone mixed with Jodorowsky with juddering guitars and sombre strings.

Amidst the above there’s a brace of songs which are classic Willard Grant Conspiracy fare such as Chasing Rabbits and Saturday With Jane. That we get to hear these is a blessing and a sure indication that Fisher was still at the top of his game as his time here grew to a close. Untethered is a wonderful obituary for the man but in its own terms it stands up with the rest of his catalogue.