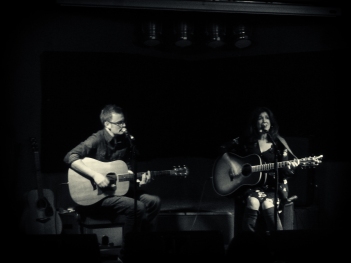 Rain Reserve are a duo comprised of Glasgow’s bluesy purveyor of swampy Americana, John Alexander, and Edinburgh’s mistress of jazzy interpretations of country music, Lorna Reid. “East meets west,” Reid quipped on stage as she introduced Beneath the Blue, a song she claimed was partly inspired by Alexander’s supposed frustration at having to endure the train journey required to write and rehearse with Reid in her native city. It’s much more than that of course as Reid sings of a universal yearning to connect with one another despite supposed differences over an almost languid guitar delivery from her and Alexander. With fine harmonies and a sly guitar solo from Alexander midway through, the song is a fine introduction to the duo’s talents.

The pair have been writing songs together since a meeting at “the hobbit house” at Moniack a few years back and first appeared at the Fringe but now, having recorded some songs, have set out on several live dates. Their songs are not country, blues nor jazz but are set in a classic acoustic duet setting with some of the songs tonight reminding one of Richard and Linda Thompson’s recordings with Drinking Alone in particular capturing some of that ill fated pair’s melancholy. “2am songs,” as Reid called them, flowed from the couple with Alexander’s gravelly voice nicely offset by Reid’s more dulcet tones while most of the songs featured Alexander wringing some notes from his guitar in various fashions, stinging blues runs, Chet Atkins like licks along with some jazzy Barney Kessel like runs. Some of the songs featured Alexander’s gritty southern inspired slopes into gothic Americana while Reid shone on a song she co-write with Darden Smith. 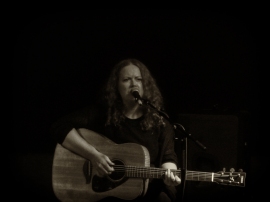 Iona MacDonald of Doghouse Roses played a short opening set which consisted in the main of songs from that acclaimed duo. Having just recently branched out on stage on her own she confessed to being nervous but once her glorious voice reached out to the audience she was home and safe. She opened with Fairground, her tale of a prostitute on her uppers before offering a powerful reading of Feed the Monster. Amid old and newer songs she offered an affectionate cover of Natalie Merchant’s Motherland and closed with the traditional Black is the Colour.

At the end of the night Alexander mentioned a friend who could not attend due to a “conflict of John’s,” Mr. Prine being the other John playing in the city tonight. As a salute to that great man all three musicians joined together for an unplugged rendition of Speed of the Sound of Loneliness with faultless harmonies as the audience sang along. A splendid close to a splendid night.