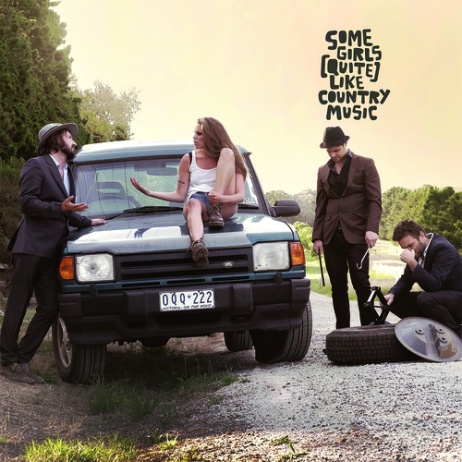 Ever since hearing Lachlan Bryan’s solo album, Shadow of the Gun, back in 2012, Blabber’n’Smoke has always welcomed new music from this Australian troubadour. Schooled as a kid in Hank Williams by his uncles who played in bar bands and then inspired by the “alt-country” bands of the eighties along with a hero of his, Tom Waits, Bryan and his band The Wildes are one of Australia’s premier roots music outfits winning a prestigious Golden Guitar award for Alt-Country Album of the Year back in 2014 with their album Black Coffee.

Some Girls (Quite) Like Country Music is the band’s fourth album and it’s released here this week to coincide with a UK tour. It’s very impressive. Bryan and his Wildes (bass player Shaun Ryan and drummer/producer Damian Cafarella ) turn in an excellent set of songs, some dry and dusty, a few country waltzes tinged with a hint of sadness and some Willie Nelson like ballads. Several of the songs feature harmony vocals from Imogen Clark while Bryan’s warm voice duets with Shanley Del and with Lindi Ortega on two of the songs.

You kind of know that an album is pretty special when it kicks off with four spectacular songs and that’s the case here while Bryan adds to the tension as he tackles some weighty subjects on the first two numbers. The opening I Hope That I’m Wrong was inspired by the #MeToo movement with Bryan introducing the song singing,

“Women do what you must for there ain’t a man in the world you can trust to go into battle for the things that you need, things that you got a God given right to receive. And I’m afraid that it’s all to you I believe but I hope that I’m wrong.”

Sung over a simple acoustic guitar strum with a baleful bass line and slight washes of telecaster string bending it’s a protest song for today as Bryan goes on to add a litany of dismay on the environment and various injustices visited upon many of us these days. Things then get sinister on the creepy A Portrait of an Artist as a Middle Aged Man which slouches like some beast borne aloft on a cranky banjo with swathes of atmospheric electric guitar as Bryan sings of a guy in some mid life crisis and his Lolita like attachment to a much younger girl, the song suffused in premonitions of doom. The mood then lightens on the breezy Careless Hearts, a song which ticks all the boxes in how to write a country love song with Bryan singing the yearning words wonderfully while the band chug on, Bryan on piano guiding them while a wheezy harmonica puffs away. Next up is a delightful duet with Shanley Del on The Basics of Love, again a master class on how to write a country love song based on the template of George Jones and Tammy Wynette as two barflies join up while Bryan and Del swap this wonderful chorus,

“On the radio Waylon is preaching the basics of love, like pillars of wisdom descending on them from above, like gentle reminders of all that the things that they love, basics of love.”

These four songs are worth the price of admission alone but there’s so much more to enjoy here. Don’t you Take it Too Bad finds Bryan singing with Lindi Ortega on a wonderful tear stained waltz written by Townes Van Zandt and Van Zandt is recalled on the chilling Peace in the Valley. The spirit of Willie Nelson hovers closely around the piano led ballad of Sweet Bird of Truth, the downbeat Dobro driven tale of troubled teenage girls on Stolen Again and the closing Someone You Know So Well where Bryan and an out of tune piano limp along wonderfully. Finally there’s the hugely impressive The Cemetery Near my Hometown, a slowly unwinding cinematic song stained with the patina of Sam Peckinpah. Listening to this one can just imagine the stony visage of Warren Oates gazing on a lonesome hilltop of crooked wooden crosses as he prepares to meet his doom.

It really goes without saying that Some Girls (Quite) Like Country Music is an essential listen. We’d say it’s his best yet and here in the UK there’s the chance to see him and The Wildes over the next few weeks including two Glasgow gigs this weekend and two slots at Maverick Festival.  All dates here.

2 thoughts on “Lachlan Bryan and The Wildes. Some Girls (Quite) Like Country Music”