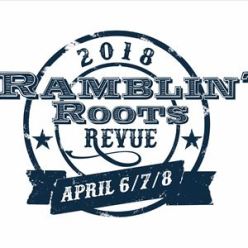 We’ve mentioned previously a couple of the newer (and smaller) festivals which have been popping up over the past few years. The Ramblin’ Roots Revue, held in Bucks University Union in High Wycombe, has its second outing this year from the 6th -8th April and will be featuring a host of acts who are Blabber’n’Smoke favourites so we spoke to organiser Tristan Tipping about the weekend’s events. First of all we asked Tristan why he decided to dip his toes into the perilous waters of organising a festival.

Why did we start Ramblin’ Roots? I guess we’re just gluttons for punishment.  We really just wanted an excuse to have a big weekend surrounded by lots of people we knew while enjoying some great music.

You run Clubhouse Records with your brother Danny but I believe that the festival is a separate entity. Aside from yourself who else is involved in setting it up?

Ramblin’ Roots is really myself along with Noel Cornford who runs Earbelly who do pop up stages for acoustic acts and Jamie Alexander who is the events manager for Bucks University Union where we hold the event. Last year we got off to a real flyer, we were pleasantly surprised both in terms of ticket sales and the feedback we got so we decided to try and have it as a regular event. We don’t really see it as a festival; it’s just a big get together of like minded people who are into the same type of music, not muddy fields and bad camp sites. It’s all indoors in an award winning venue with some great bars and food. We’re all in our forties so the idea of standing in a wet field for days doesn’t really appeal, personally I don’t want to be more than 15 feet away from a bar.

It certainly seems to be a bargain in terms of the ticket prices.

Yes, it’s under a pound per band if you buy a full weekend ticket. We’ve got 36 artists playing and it’s only £32:50. We’ve tried to keep it reasonable and the drinks and the food are all sensibly priced,  having it in the Union keeps costs down and we’re not out to make a huge profit, we just need it to wash its own face. We want an event that attracts folk so we’ve kept the prices as low as we can manage. It’s great if you think that it’s a bargain, I hope other people see it that way. It’s difficult to get people to get out of their house to come to events but I think we’ve chosen a good weekend to hold it on, there’s not a lot of other things going on near us then. It is hard work and there is a bit of a risk in putting anything like this on but as I said a lot of people turned up last year and we’re getting really good support and good mentions.

And it’s not dependent on the weather as it’s indoors.

We’ve got three stages. There’s the acoustic stage which is actually outside and two indoors, the main room holds around 600 people and the other is more of a traditional bar setting. We never have more than one act playing at the same time so if you’ve got the stamina for it you can actually see all the bands that are playing.

It’s a great line up, I presume it’s a lot of hard work to assemble such a cast but how do the three of you choose who is playing?

Well obviously it is down to availability but aside from that it’s important to us that there’s a mix across the Americana genre so that there’s a degree of variety. I mean it’s a broad church so we have some of the more traditional folky and bluegrass stuff alongside more alt country music and some almost psychedelic West Coast sounds.  So there is a common thread there and all three of us have worked in the industry long enough to have some great contacts and a lot of mates so it is a community we’re tapping into. We want to be surrounded by acts we enjoy but the main common denominator is that they are all excellent live acts. Between us we’ve seen all who are coming to play and we know they can offer a great experience on the day.

Looking back at last year’s festival I see that aside from the music there was a pie eating contest!

Yes although it’s a bit of a hazy memory. I think it was my brother who won it. I mean it’s all about the music over the weekend but we’re trying to make the whole event an experience with the food and drink just as important. We’ve got lots of food stalls with free tastings and we wanted to have a bit of fun as well which is where the pie eating came in.  I’m not sure what we’ll do this year, someone suggested horse shoe throwing!

This is maybe an unfair question but who are you looking forward to seeing?

That’s a tough one but I’m really looking forward to The Midnight Union Band who I’ve seen at Kilkenny a couple of times and then The Raving Beauties and The Hanging Stars are right up my street as I really like that West Coast type of thing. But it’s all quality from top to bottom. The act who most people seem to be really looking forward to are Bennett Wilson Poole who are just starting off and who release their album the weekend of the festival.  The other set I’m excited about is the Clubhouse All Stars tribute to Tom Petty. We actually did that at Truck Festival five years ago and with Tom passing away quite a few people asked if we could do it again. We’ve got a wealth of people who can come on and sing their own personal tribute so it should be a great show.

The Revue has a charity partner this year, Ridin’ The Roots.

We’re supporting our good buddy Del Day who is doing a sponsored cycle ride from Lewes to Kilkenny to raise money for Cancer Research. It’s in memory of Willie Meighan who was at the heart of the music scene in Kilkenny and who I had the pleasure to meet when I was at Kilkenny Roots. We’ll be having a collection at the shows and Del will be there to tell folk all about it. It’s a pleasure to do our little bit to help.

Tickets for The Ramblin’ Roots revue are available here

You can read about and support Ridin’ The Roots charity cycle here.

One thought on “Ramble on down to The Ramblin’ Roots Revue”