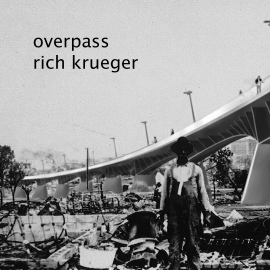 We do love our mavericks here at Blabber’n’Smoke, folk who approach music from a slightly different angle and Rich Krueger seems to fit that bill. He was a member of The Dysfunctionells (who described themselves as “THE Butt-Ugliest Band in Chicago”) and who recorded at various times with Peter Stampfel and Michael Hurley, so, a good maverick pedigree there.

Krueger, who works as a neo natal doctor in Chicago, is readying two solo albums for release and this EP is a foretaste of what’s to come. Recently he was a finalist in the New Folk category at The Kerrville Folk Festival and Overpass opens with the fine fiddle fuelled A Short One On Life, a song about a female barfly who picks up strangers in bars. With gritty lyrics, Krueger describes her hard life, nights spent with, “one night wonder(s) with a heart of gold and a name for his cock that no thinking person would ever even name a dog” before some slide guitar from Seth Lee Jones adds some muscle to the song. In Between, Kingfish is a powerful song about homelessness with Krueger weaving Huey P. Long (AKA The Kingfish) and Sam Walton (founder of Walmart and born in Kingfisher, Oklahoma) into the tale, contrasting their respective philosophies. Over a lachrymose fiddle and weeping accordion (played by John Fullbright) Krueger achingly highlights the plight of the underprivileged and ends the song with a surreal vision of Long and Walton sitting in an abandoned car beside a derelict Walmart with Woody Guthrie and Franklin Roosevelt for company. A potent symbol for the death of the New Deal.

Next up Krueger takes a sharp turn on Yesterday’s Wrong (Green) which is coloured by tablas, sarangi, tanpura and kanjira giving it an undeniable Indian sound. It rambles for over six minutes in exotic fashion as Krueger seems to lament the loss of innocence that permeated the sixties and the ecological nightmare we all face. Recalling Donovan or The Incredible String Band it’s hypnotic. What Are We is perhaps the most straightforward song here in terms of its delivery as Krueger offers up a Randy Newman like piano song with soulful vocal backing. Here he sings of Nero setting Rome alight and suggests similarities with his present day President. A hidden song at the end, Kerrville, Oh My Kerrville, written back in 1991, finds Krueger with acoustic guitar identifying with his idols, musical and otherwise, on a humorous take on the festival which is somewhat tongue in cheek but stuffed full of arresting images.

It’s a tremendous listen and it bodes well for the forthcoming albums. You can buy the EP here

One thought on “Rich Krueger. Overpass”