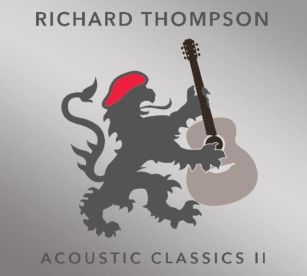 Richard Thompson pleased a great many people with his 2014 release, Acoustic Classics, where he handpicked several of his songs and delivered them solo stating at the time,  “I really wanted something that would reflect the acoustic shows but we didn’t have anything like that, Just some old, slightly scratchy recordings of solo sets that I wasn’t really happy with.” It seems that he was happy with the result as he’s gone and done it again with this second volume where he again goes through his extensive back catalogue coming up with 14 gems and this time he’s included his Fairport Convention days with three of the songs taken from that period.

He opens the album with the acerbic She Twists the Knife Again which is perhaps the least successful of his renditions here although his staccato guitar runs reflect the jagged lyrics.  The Ghost Of You Walks which follows is more representative of the album as a whole as Thompson settles into his familiar melancholic mood while his guitar playing is expressive and tender as is his singing. The first of the three Fairport songs, Genesis Hall, follows suit with Thompson reining in the Fairport waltz arrangement unveiling it as a modern folk classic with the words (written about a raid on squatters with Thompson’s police officer father participating) allowed to ring free. Jet Plane In A Rocking Chair and A Heart Needs A Home, both from his partnership with ex wife Linda, follow with the latter particularly affecting.

It’s of note that Thompson can invest songs that were originally recorded with full rock band arrangements with as much power and drive using just his acoustic guitar. Here Pharaoh and Gethsemane (from Amnesia and The Old Kit Bag respectively) pack a punch with Pharaoh in particular stern and glowering, its message undimmed and particularly apt for these benighted times. Guns Are The Tongues, another powerful protest song is the one song here that has added instrumentation with a mandolin added to the guitar and again Thompson invests it with a powerful dignity.

He goes all the way back to one of his earliest and best known songs when he tackles Meet On The Ledge and while the original can probably not be beat it’s great to hear Thompson sing this. The biggest surprise on the album is with a song of similar vintage, Crazy Man Michael. Originally released on Liege & Lief when Fairport were digging deep into folk music it proved that Thompson and co-writer Dave Swarbrick were able to deliver songs that reeked of tradition and here Thompson is just perfect as he maintains the eerie folk magic that informed the original.

It’s another triumph then for Thompson and a must for his many followers. And for those wanting more there’s another disc of Acoustic Rarities available via his Pledge Music Page here.