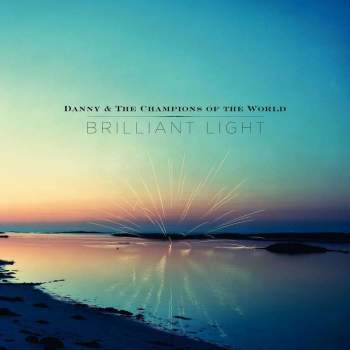 One of the greatest live acts currently in the UK, Danny & The Champions Of The World are a wonderful conglomeration of Country, Soul and Springsteen-like blue collar rockers, an incredibly attractive mix that is intoxicating in a live setting but which they also manage to convey on their recordings. 2015’s What Kind Of Love leaned heavily on Danny Wilson’s love of classic soul singers such as Solomon Burke and Arthur Alexander with their then live show coming across almost as a Soul Revue, the band adopting several styles throughout the night, able to be soulful, sobbing or flying with some fine extended workouts. The expansive Brilliant Light (an album that was several months in the making as opposed to their usual tight studio schedule), finds the band drawing all the threads together. A supremely well drilled unit comfortable enough to take their time, collaborate more than is their norm and deliver a hefty double disc worth of what is, in the end, just about a perfect Danny & The Champs album.

Brilliant Light has 18 songs spread over two discs (on CD and vinyl) offering almost 80 minutes of unalloyed joy. The songs cover the spectrum, pedal steel honeyed country songs, soulful epics and even a brief jaunt into reggae rhythms. Wilson has, for the first time in several years, collaborated with various band members and others in the songwriting process with only one song here a solo effort. So there’s a poem by Will Burns set to music, a co write with John Wheatley while James Yorkston has two co writing credits with other numbers down to the likes of Chris Clarke and Paul Lush (who kind of kick-started this off as he worked with Wilson on a couple of songs on What Kind Of Love). Despite the all hands to the deck approach (and the addition of a brass section and numerous backing singers) the album is a cohesive whole with Wilson’s attractive slightly husked voice and the mellifluous sounds of the band never failing throughout.

It’s tempting to look at the album as four distinct slices of music (the way some double albums used to be) but in the end this theory doesn’t really stand up to scrutiny. However a rough guide might consider side one as classic Danny & The Champs, side two the soul side and three and four a fine mix of the above. They open with Waiting For The Right Time, a vigorous mix of piano, organ, pedal steel, guitar and backing singers, the definitive Champs sound indeed as Wilson considers a gypsy like musical existence. Bring Me To My Knees is another fine glide into country rock with glistening pedal steel to the fore. The seventies tinged mix of reggae and blue eyed soul of It Hit Me startles at first but as the band (in particular organist Andy Fairclough) settle into the groove the song grows in stature and the overall playing as it runs to its end is just spectacular. You’ll Remember Me harks back to Rod Stewart’s glory days when he might have looked like a dandified scarecrow but was singing from his soul as Wilson commands this impassioned ballad and the band are slinky and soulful- it’s the slow dance song that used to close school discos if anyone can remember that far back. Wilson closes the side with his own dose of nostalgia on Swift Street, recalling his childhood in Melbourne, again with a hefty dose of soul in his voice while the band here are more akin to the Stax template with the drums in particular getting that snare snap just right.

Rather than go throughout all 18 songs it’s suffice to say that the standard of side one is maintained throughout.  Consider Me has the keyboards somewhat Stevie Wonder funkified although the pedal steel continues to glide throughout and Lush has a particularly fine solo while Coley Point (with words by Will Burns) is a fine impressionistic portrait.. There’s a Van Morrison bustle to the brisk It’s Just A Game (That We Were Playing) and some Little Feat funkiness on Waiting For The Wheels To Come Off and Long Distance Tears while Let The Water Wash Over You (Don’t You Know) opens with a guitar motif that recalls The Allmans and closes almost like a jam band with guitar and keyboards meandering in a fine fashion and Don’t You Lose Your Nerve is more silky seventies soul. The album closes with another classic Champs styled song, Flying By The Seat Of Our Pants, the glorious sounds generated grounded by Wilson’s on the road philosophy and a rejoinder of sorts to the opening song.

There’s so much to discover and relish here and, should you wish, you can buy a deluxe 3CD version which has an extra disc of instrumentals. In the meantime, I have to mention my favourite song from the album, Gotta Get Things Right In My Life. Here everything clicks, Wilson sounds wonderful, the chorus is mesmeric and the band just lock into a groove that will charm the socks off you. Here the Champs stake their claim to be considered in the pantheon of the greats as the song spirals through seven minutes of unparalleled beauty.

6 thoughts on “Danny & The Champions Of The World. Brilliant Light. Loose Music”