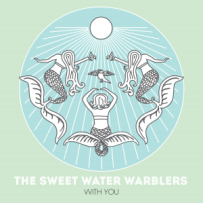 With a band name that could have featured in Oh Brother, Where Art Thou? The Sweet Water Warblers are actually a concoction of three excellent Michigan singers; Lindsay Lou may be familiar to many here as the singer with Lindsay Lou and The Flatbellys (who wowed their crowds at Celtic Connections earlier this year). Completing the trio, Rachael Davis and May Erlewine may not be as well known over here but a swift Google search reveals critical and popular acclaim for both in the American folk and bluegrass communities. Here all three stand as equals and it may well be said that the sum is greater than the parts as this brief disc is astounding.

With Erlewine writing two songs and Lindsay Lou and Davis one each (the writer taking the lead vocals on each) and one traditional number (with Davis on lead vocals) the EP is a truly collaborative effort. Lindsay Lou plays bass, Erlewine guitar, keyboards and fiddle and Davis guitar and banjo and the music is an engaging mixture of folk, soul and blues but the standout element is the entwined harmony singing from all three on all of the songs here. Despite the variety on the EP (which reflects each writer’s individuality) the harmonies knit the disc together recalling the likes of Sweet Honey In The Rock and The Roches at times.

Lindsay Lou’s Sing Me A Song opens the EP. An acapella showcase for their voices it digs deep into the Gospel, spiritual and hymnal roots of American music with a slight sugaring of doo-wop at times. Erlewine’s Too Soon is a delicate salute to late night fun as the sun comes up while the band still plays. Her voice is a delight here, slightly reminiscent of Maria Muldaur, as are the harmonies. Her other contribution, With You, is a magnificent ballad dripping with graceful piano and guitar and it brims with a romantic yearning.

Davis’ contribution, Lazarus, is a rootsier affair with an Appalachian air as she sings of a mother swept away by a biblical flood and hoping her bones will return home. With aching fiddle from Erlewine it’s spine chilling.  The one traditional number here is actually a mash up (if one can use that term when writing of roots music) of Amazing Grace set to the Animals’ arrangement of House Of The Rising Sun and for the most part it works. Davis wails with a bluesy abandon and riffs away on electric guitar but again it’s the harmonies working their magic that lifts the song.