At times, it seems like life is just one big shit storm, the past year a steady downpour of blows against the empire of anyone in their right senses. So any rays of sunshine are to be welcomed and one such was the welcome return of Peter Bruntnell (a cult hero according to The Guardian  to Glasgow just a few months after his last visit to the city. Back in September Bruntnell and his band tore the roof off as the guitars gyred and gymbled with some ferocity. As that Guardian article pointed out Bruntnell is not only a psychedelic guitar warrior but also a master of the perfectly crafted pop song. Tonight this side of his coinage was expected to be at the fore as he proffered the UK debut of The Peter Bruntnell Trio; Bruntnell on acoustic guitar, Scots string wizard Iain Sloan on pedal steel and veteran  Danny Williams (ex Black Grape and St Etienne)  on double bass.

The trio, packed into a corner of the tiny room with a capacity audience just inches away didn’t disappoint. The opening Clothes Of Winter was a winsome reminder that Bruntnell follows in the footsteps of writers such as Nick Drake, a sense reinforced by the following Sea Of Japan while Tin Streamer Song was suffused with memories of a lost way of life. The songs were delivered with a creamy melancholic air, Williams supple on bass, Sloan winding his way through the melodies and they turned in magnificent versions of Here Come The Swells and an awesome By The Time My Head Gets To Phoenix. So far so sublime but the trio (despite this being their first time together) expanded their sound with Sloan picking up his telecaster and Williams proving to be quite adept at coaxing sounds from his bass with his bow with the first murmurings heard on John, a song that pays tribute to Mr. Cash that had some stormy guitar from Mr. Sloan. They ventured further into the hinterland with a stunning delivery of Cold Water Swimmer as Williams bowed a low droning backdrop before Bruntnell and Sloan added some fractured psychedelic haziness as the song slowly segued into the summery bliss of Domestico, tonight given a tougher approach than on the recorded version.

Allowing his compadres a breather Bruntnell played End Of The World solo which was quite mesmerising, a quiet moment equal to the best of McCartney as on Blackbird. With the band back on St. Christopher flowed sweetly while Have You Seen That Girl Again dipped into power pop territory. The crowd were loving this but all too soon the curtain dropped allowing the one encore which surprisingly saw Bruntnell dipping into the catalogue of another English songwriting genius as he performed Roy Harper’s Another Day. A wonderful end to a fantastic show. 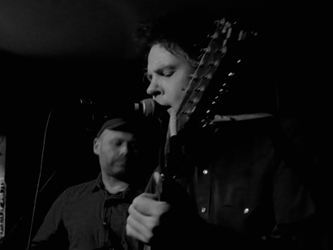 The evening opened with Norrie McCulloch, Stirling based singer/songwriter who has recently released the excellent Bare Along The Branches. I saw Norrie play a very fine album release show a few weeks back but have to say that tonight topped that. Playing a 12 string acoustic for much of the show added resonance to his playing which was further aided by the electric guitar of Dave McGowan who came on stage for several numbers. The opening Calico Days (from second album These Mountain Blues) positively skipped with joy and celebration. It’s a song that increasingly reminds me of Fairport Convention’s Come All Ye, not sounding similar but a fellow jubilant hymn to comradeship. From the new album the languid Little Boat floated on McGowan’s liquid guitar fills, Frozen River rippled with a folky lilt and Around The Bend satisfied all with its down-home Neil Young like honeyslide harmonica intro. Best of all though was the closing song which was a tremendous performance from McCulloch and McGowan of Beggar’s Woods, a song soaked in memories and tonight glowing with McGowan’s silvery playing.

One thought on “Peter Bruntnell and Norrie McCulloch. Sounds In The Suburbs @ The Doublet, Glasgow. Wednesday 22nd March 2017”