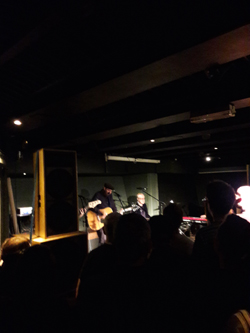 Hailed by The Guardian some years ago as “America’s greatest living lyricist” Mark Eitzel has toiled at the coalface for around 30 years gathering a fiercely loyal following but steadfastly remaining under the radar of mainstream acceptance. There have been brushes with fame (when his band American Music Club almost charted in the early 90’s) and a brush with death when he suffered a major heart attack seven years ago.  Throughout all this Eitzel has released a series of albums that, aside from occasional forays into electronica, portray him as a poet of the streets with a mellifluous voice, an amalgam of Scott Walker and Jean Genet sometimes surrounded by an almost middle of the road musical swell. His latest album Hey Mr. Ferryman, produced by Bernard Butler, has been acclaimed as one of his best, a return to form although it’s a fair bet that the majority of the packed crowd tonight would argue that Eitzel has never lost his form.

It’s a sold out show and as we said, packed. Eitzel is playing with his band and Glasgow hasn’t seen that for some time now. The only problem tonight is that with such a full house and no stage as such the only folk who are able to see the band are those who arrived sharp and got to the front. A minor quibble however as there’s an intimacy to the show, an almost palpable sense of connection to the man who rewards the audience with a wonderful balancing act, his edgy, sometimes angst ridden songs leavened by a deliciously dark and at times ribald commentary. The band (Gareth Huw Davies, Patrick Nicholson and Stephen Hiscock) are well attuned to the tunes after six weeks of touring, tonight the last show of their European trek. They capture the sonic swells and dips of his music, his smoky croons and nervy rock squalls all perfectly delivered. Eitzel himself apologises for his perceived vocal limitations believing his voice shot after so many shows but to our mind he was still in fine voice as he closed the show with Jesus’ Hands (accompanied by the audience) and the threnody of Western Sky.

There was the LA smog ridden Mission Rock Resort and the cymbal splashed torch song of What Holds The World Together (introduced by Eitzel as “a song that doesn’t make sense, even to me”). A triumphant I Love You But You’re Dead showcased Eitzel’s mordant way with words as it slouched slowly from the band while a song from the new album, In My Role As A Professional Singer and Ham shimmered and burned with a visceral force. From the old days Firefly fired up the crowd and from the new album, The Last Ten Years was a defiant declaration that Eitzel can deliver soaring melodic rock.

Opening the evening was the Portland Oregon based songwriter Fernando. Since overcoming a chronic illness two years ago Fernando has been touring like fury and this was his second visit to the city in just over a year. On record he is supported by friends such as Peter Buck and Paul Brainard dishing up rootsy rock not dissimilar to that of Alejandro Escovido. His melancholic opening number, White Trees set the scene for much of his 40 minute slot, his tender guitar and clear voice floating through the audience. The Devil’s In The Sky was another plaintive number showcasing Fernando’s talent for capturing emotions and setting them within a dark Western vista. Como Sueno, sung in Spanish, was a tribute to his union organiser aunt who defied Argentinian authorities in dangerous days while The Dogs was a blasted heath story worthy of Cormac McCarthy. His late colleague Jimmy Boyer was celebrated with a fine delivery of Three Sheets To The Wind, a slowly loping country song before Fernando returned to his own catalogue for the lonesome strains of Watchtower and a poignant Kingdom Come before closing with Fade Out, a song dedicated tonight to his grandfather and played with a quiet dignity. Altogether a wonderful opening set.