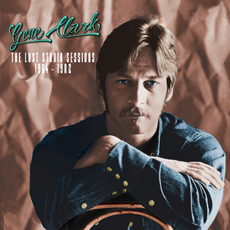 I think it’s fair to say that the release of this album might be proof for Gene Clark fans that Santa really exists. News of an album composed of 24 unreleased Clark recordings (not even on bootlegs)  broke in the middle of 2015 with a release date of December 2015 mooted.  Of course that date came and went with no sign of the album. Fans, used by now to the haphazard ways that have accompanied various other Clark projects filled forums with their hopes and fears around the release, evidence of the devoted following that Clark still incites.  Some of this may be a legacy of Clark’s spectacular ability to snatch failure from success in his brief life. His post Byrds albums were plagued by bad luck and bad timing, overshadowed by peers who perhaps had better management or a more disciplined approach to life.

Currently Clark is up there with Townes Van Zandt as a posthumous favourite, critics now hailing albums that were criminally overlooked in the first instance. There have been a valiant crew of believers who have been flying his flag for some time and there have been some excellent reissues and compilations along with John Einarson’s biography and the documentary The Byrd Who Flew Alone. We can now add to the roster this incredible collection of songs, all fully fledged studio recordings, no demos or alternative takes, which takes us from a fresh voiced 19 year old Clark straight out of The New Christy Minstrels through to a reunion with fellow ex-Byrds Michael Clarke and Chris Hillman in the early eighties. Here we should salute Sierra Records who have doggedly pursued this project and come up with the goods with the full consent of Clark’s estate (his sons Kai and Kelly Clark) with the album available in several formats, fully annotated and with some bonus songs for those who subscribed to the deluxe formats.

The album opens with a brace of songs recorded by Jim Dickson in 1964, the 19 year old Clark sounding earnest with already a hint of doomed romanticism in his delivery. Just months before he teamed up with his future band mates for the PreFlyte songs Clark is already stamping his unique style with the opening The Way I Am a signpost to the future.  I’d Feel Better (complete with some whistling) is upbeat in a Peter, Paul and Mary pop direction but  Clark heads into deeper territory on the following That Girl with his voice deeper and the lyrics bereft, his doomed minstrel waiting in the wings here. The five songs gathered here are curios to be sure but also a fascinating glimpse into the nascent genius of the man, a fine hors d’oeuvres for the main feast to follow.

From 1967 there are two gems, one of which exemplifies the hound dog of showbiz shenanigans that trailed Clark. His folk baroque (and Dylanesque) Back Street Mirror is a worthy companion to the songs on Echoes but was canned only to reappear some months later with his vocals stripped and replaced by those of the UK actor David Hemmings for his own album release (a crime repeated in 1972). From the same session is a pulsating slice of country soul that recalls both The Boxtops and Gram Parsons with Clark and trumpeter Hugh Masekela powering through Don’t Let It Fall Through. Next up is what might be called the heart and soul of the album as Clark delivers eight songs recorded around the same time as the White Light sessions. Here he is approaching his zenith, the songs achingly beautiful with a spiritual dimension and laid down simply, just voice and guitar and 20 minutes of sheer bliss.

There’s a brief pit stop into Flying Burritos territory on the gorgeous remodel of She Darked The Sun, presumably recorded around the time Clark dallied with the Parsons’ gang for the wonderful Here Tonight, before another generous and fascinating collection of songs. In 1972 Clark was in the studios with a top notch crew (Clarence White, Sneaky Pete Kleinow, Spooner Oldham, Byron Berline, Michael Clarke, Claudia Lennear) and the four songs here are excellent examples of the blissed out country rock that was popular at the time with Clark excelling on Roll In My Sweet Baby’s Arms. Again the curse strikes with Clark wiped from the tapes and the backing tracks for several of these songs used on Terry Melcher’s portrait of post Charlie Manson LA on his album. The album ends however on an upbeat note with some fine country rock recorded with Nyteflyte, a would be super group comprised of Clark, Chris Hillman, Herb Pedersen, Al Perkins and Michael Clarke in 1982. They cover Gram Parsons, The Box Tops and Rodney Crowell along with a final outing for Feel A Whole Lot Better and on the strength of the delivery here it’s a pity that they didn’t take off.

There isn’t much else to say here. Gene Clark nuts will already have this nestled under their wings but for anyone interested in the development of LA singer song writing, the history of The Byrds, The Burritos and even the Eagles then this is well worth a listen. An album curated with care and a love of Gene Clark’s music.