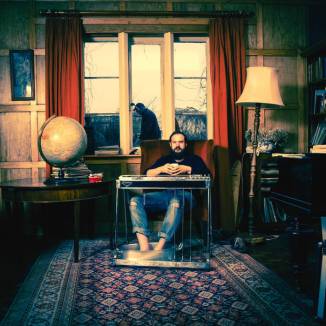 So, here it is. The first release from the record company set up by Ark PR man Del Day and Danny Champ, both of whom spoke to Blabber’n’Smoke about the label here. It’s simultaneously a bold move; an instrumental pedal steel album and a safe bet; Henry Senior Jr being Danny and The Champs’ pedal steel player with all of the Champs playing on the album. There is of course a history of “solo” albums from pedal steel players, mostly Stateside chaps such as Buddy Emmons and Pete Drake although we shouldn’t forget our very own maestro BJ Cole who’s 1972 release The New Hovering Dog is very much a cult classic.

It’s Cole actually who was something of a mentor to Senior Jr after the 14 year old budding guitarist stumbled upon the wonders of “the ironing board of love” (as Mr. Champ calls it) and set out on his career. And while most folk immediately think of country music when one mentions pedal steel well it appears that it was while listening to Pink Floyd’s Breathe (from Dark Side Of The Moon) that Senior Jr. was hit by the fretless bug. A listen to Cole’s track Five Pieces For Steel Guitar and Percussion (From the Hovering Dog album) should suffice to show that the instrument is capable of so much more.

So, in amongst this tangle of foot pedals and knee levers what has the man come up with? Senior says, “I wanted to use the pedal steel outside its traditional context, picking up rhythm parts that guitar or keyboard players would play and using sounds and effects that they use.” So there’s no keening country effects here, Senior sounds funky with a nice big fat sound springing from his fingers while at times he takes flight in tandem with Paul Lush recalling twin guitar attacks from the likes of The Allman Brothers as on the fresh faced romp of Along Came Molly. There’s lush harmonics on the totally solo closing song, The Presence Of Namaqua, a tune that could happily sit inside Cole’s work, proto ambient Eno music.

The meat of the album is in the soulful funk that permeates much of the tunes here. There’s one foot in the Southern country grooves of a band like Barefoot Jerry, another in the New Orleans syncopation of The Meters’ instrumental days, indeed we have to pay tribute to the band here as they really nail the tight yet loose (go figure it out) beat with sax man ‘Free Jazz’ Geoff excelling on the title song, here exhuming the treasure trove that is Blaxploitation soundtracks.  Furthermore they delve into Western Swing on Cat Doggin’,  and there’s even a touch of dub on the glorious strains of Goodbye Bowler Hat as the pedal steel glides over the bass’n’drums.

Short and very sweet Plates of Meat is manna from heaven for anyone interested in the sound of pedal steel while there’s a nice sense of humour allied to the whole project. The title perhaps a cockney allusion to Little Feat, who knows?  The titles of the tunes, seemingly random, would not seem out of place on a Charles Mingus album. Whatever, it’s great fun and highly recommended.