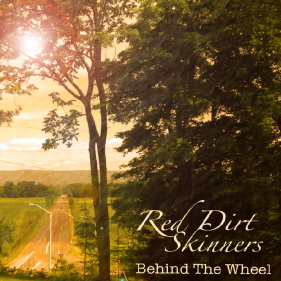 Husband and wife team Rob and Sarah Skinner have an enviable reputation to trade on, feted by country and blues audiences with awards for their albums and Sarah’s saxophone playing. Their bluesy side was to the fore on their last release, the warts and all Live At The Blue Lamp but on Behind The Wheel they seem to have settled on a more bucolic, almost folksy approach.

They kick off with the rousing title track which offers Sarah opportunity to display her Dixieland like soprano sax on a song which woozily wanders along at a fair clop as they sing about the joys of life on the road. A fine opener the one complaint here is that it fades out far too soon, just as Sarah is letting loose on the sax. It’s one of two up tempo numbers here, the remainder a collection of contemplative songs that are complemented by Rob’s guitar skills as ripples of strings float throughout, at times gilded by the floating sax solos, a style used to best effect on the dreamy Home Sweet Home. The Other Half is a boudoir piece, the couple swapping verses in an intimate fashion but Eleanor Joan is very much a showcase for Rob, his psychedelic guitar buzzing away behind his acoustic picking as he sings this render song, Sarah’s voice closely harmonising. The Inspiration is a stark piece, piercing harmonica and stinging guitar reflecting a hopelessness that’s contained within the lyrics despite the allowance that the experiences might become, as the title says, an inspiration.

A pity then that the mood that’s built up so far is somewhat spoiled by the horn driven Bad Apple, a song that probably works well live and is surely an opportunity for Sarah to wig out (as she does here) but in comparison to the other songs it doesn’t really carry any heft. Hurrah then for the almost medieval Thoughts Of the Past which is an ode to the past glories of a woman who’s life is now counted by the glasses of wine she can get hold of. Daybreak and a reprise of Eleanor Joan close the album, the former a lengthy narrative that switches courses as it twists and turns in its capture of various predawn happenstances before launching into an extended display of guitar dexterity and saxophony.