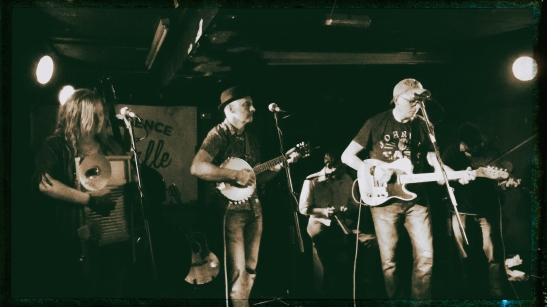 Crikey. you go along to a mid week show in a cellar bar on a rainy night expecting to see the same old stalwarts in the fair to middling sized crowd that has turned up. Not tonight however as the place was packed. Had Nottingham’s prized purveyors of skiffle, folk and old time country started trending since your correspondent left the house? Snatched pictures of Al Rate and Kate Moss appeared on the Huffington Post or Barak Obama revealed they’re on his Spotify playlist? No. Truth is a couple of The Vaudeville Skiffle Show players moonlight as physiotherapists when they’re not whipping up a storm onstage and there just happened to be a worldwide physiotherapy conference going on in Glasgow this very week. Canny folk that they are the band slipped the word out with the result that this was perhaps the most cosmopolitan crowd Blabber’n’Smoke had ever hung out with. Australians to the left, Americans to the right and that was the English speakers. Indeed, there was a veritable Babel of chatter in between songs. 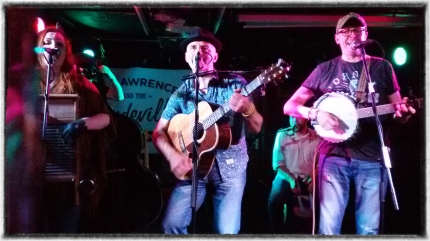 Now I don’t know how many of the audience were fans of the band before the show, perhaps just keen to investigate the ergonomics of playing a washboard or banjo, but I’d bet that by the end each and all were converts after a storming set. Skiffle, jugband and old time country are all kind of rabble rousing in their own way and the band stoked the crowd throughout ending up with a fair amount of them on stage scrubbing away at a variety of washboards and kitchen implements and wheezing into kazoos and whatnot for the final song, Mama Don’t Allow No Skiffle ‘Round Here. Indeed as one entered a kazoo was thrust into your palm with instructions to wait for the invitation to play.

It wasn’t all party music. On their album, Sons & Lovers, DH Lawrence and The Vaudeville Skiffle Show delivered some skilful and moving songs that draw from English and American folk traditions with several delivered tonight along with some choice covers. You Saw Me Fall was given a cool viperish vamp, Sons and Lovers (adopted from DH Lawrence’s novel, “he was a bit of an arse,” they said) portrayed their roots while their latest single, the somewhat awesome Black Rain did have the audience transfixed with its sinister delivery. However it was the good time element that had the crowd baying, a mass kazoo participation on Tom Waits’ Chocolate Jesus was great fun while keeping with the Jesus theme their rendition of Hayes Carll’s She Left Me For Jesus (with the band aping a gospel tent confessional) was a definite hit. The band with an ever revolving frontsman and with much swapping of instruments entertaining throughout the night.

Support tonight was Ciaran McGhee from Edinburgh, a chap you can catch at the likes of The Royal Oak. McGhee is in thrall to traditional Scots folk music and has a voice that can thunder out the throatiest ballad as evidenced on his powerful rendition of the Jacobean Macpherson’s Rant, at times reminiscent of Dick Gaughan in his prime. A songwriter himself McGhee sang several of his own songs which show promise including Hypocrite and Sing me A Love Song, the latter showing he is not all rant and rave. Perhaps to celebrate a night out in Glasgow he offered his take on Cod Liver Oil and The Orange Juice, a song popularised by the late Hamish Imlach. Steeped as it is in Glaswegian patois he obligingly translated the words into Standard English for the benefit of our visitors. 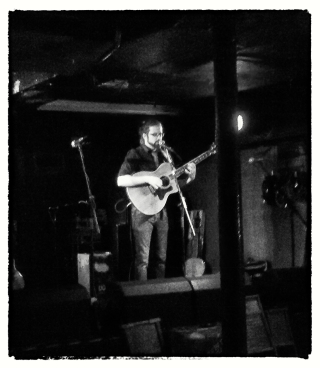 Peter Bruntnell is heading out throughout July with band in tow for what promise to be some spectacular shows. Fresh from his recent jaunt to Ireland and what was reported as a barnstorming performance at Maverick Festival Bruntnell is riding high on the very postitive reviews of his current album, Nos Da Comrade, a recent Mojo album of the month. Described by The Guardian as “an alt-country genius,” over the course of 11 albums this Welshman has been a flag carrier for home grown rock that picks up from where the likes of The Byrds and Crazy Horse left off. Blabber’n’Smoke reviewed Nos Da Comrade here while Americana UK gave the album a rare 10/10 review.

Peter has very kindly offered one pair of tickets for any of these shows for Blabber’n’Smoke to hand out. If you want them just email us at paulk.blabbernsmoke at gmail.com with Bruntnell in the subject line and tell us who was the inspiration with his bully boy tactics for Peter’s song, Mr. Sunshine. Please include contact details and the show you wish to attend.  The tour starts on the 14th July so the competition closes on Tuesday 12th. In the meantime here’s an example of the man in action.

Despite being championed by Bob Harris Annie Keating still seems to be somewhat under the radar in the big old world of Americana. Undeterred she keeps plugging away with Trick Star her seventh album and one that ensures that those in the know including The Telegraph’s Martin Chilton and the Glasgow Americana festival, will continue to sing her praises.

Keating says of Trick Star that it’s about being raised up, torn down and finding the way back home. There’s certainly a lot of memories contained here, the title song is about her first bicycle (something like a BMX) and offers her the one opportunity on the album to rock out with snarly slide guitar over a solid organ groove and a fine Dylan subterranean blues rap in the middle. The remainder of the album however is classic Keating, her voice often tender, almost childlike in its vulnerability at times, the songs clusters of fully realised images and emotions. While there’s a Donovan like innocent frivolity on the trombone borne Creatures, Keating wishing for the freedom and peace of mind  she imagines the animal kingdom to enjoy, and a fine pop rock swirl on Time To Help Me Forget it’s on the more restrained and contemplative numbers where she truly shines.

In The Valley is a lilting number with sweet pedal steel and viola and a bittersweet lyric as Keating describes an Elysian field, a place to lay her head. Slow Waltz aches, recalling Patti Page’s Tennessee Waltz as it slowly wends its way, Keating recalling a summer night at a carnival many years ago with the opening lines again allude to death as she sings, “I’m over my head, I’m trying not to care, I’m six feet under the overpass where we first met”.  Regret and forgiveness is writ throughout the very tender Orchard and the winsome country stylings of Come and Go while Fool For You is a halting and intimate song of self recrimination.

Keating’s regular posse of musicians ((Steve Mayone, Jason Mercer, Chris Tarrow, Yuval Lion and Trina Hamlin) are credited by her as having been fully involved in the evolution and arrangement of the songs and throughout they are in fine form. They shine however on Lucky, a song that recalls the simple folkiness of John Prine in its lyrics as the band combine rippling acoustic strings with a fine curdled electric guitar.

According to Keating the seed of the album was sown at a concert at London’s Barbican Theatre when she heard the Brooklyn Youth Chorus performing Black Mountain Songs, a celebration of the North Carolina institute which in the 1930’s forged a blueprint for American alternative culture. Moved by the performance Keating wrote and has teamed up with the Chorus for the closing song here, Phoenix.  A celebration of the power of music and words, the rebirth of hope, an anthem of optimism it’s an addendum to the main body of the album but it’s also an anchor, ensuring that despite loss and hurt there’s always hope.