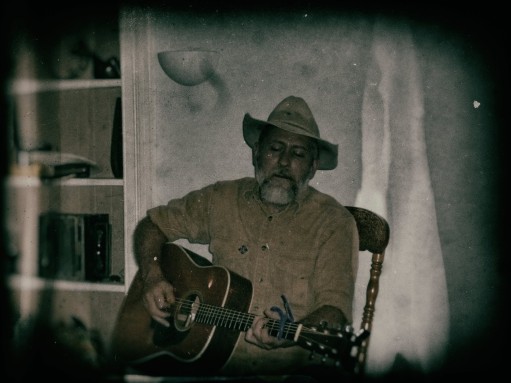 You’ve probably heard of the house concert movement that’s been creeping up over the past few years, you may in fact have attended or hosted such an event. For Blabber’n’Smoke this was our first foray into such an event as we’d heard that Chuck Hawthorne, the Texan ex-marine was appearing at one not a million miles from our headquarters.

The concept is relatively simple. A host connects with an artist, arranges whatever deal needs to be arranged and then opens up their house to a bunch of strangers (and some friends presumably) who have the opportunity to hear and meet the aforesaid artist. Thereafter the details can vary.  Is there a suggested donation as a cover charge? Do you bring your own beer? Where do all the chairs come from?  Fortunately, there’s a wealth of information and advice to be had regarding all of this on various websites and Facebook pages and one such site is managed by Blabber’n’Smoke’s good friend Rob Ellen (it’s here ) and it was Rob who connected Mr. Hawthorne with last night’s host.

First off, it was comforting to see that you don’t need to have a mansion or some such in order to host a house concert. This one was in a top floor Glasgow tenement flat, the front room set up with three rows of assorted chairs and couches at either side. A simple wooden pallet allowed a podium for the artists. While some of the audience were already acquainted by the end of the night we were all on good talking terms, swapping emails etc after a couple of breaks which allowed a fine degree of mingling. I didn’t do a headcount but there were about 25 folk in attendance.

It’s all about the music of course and here the concept really proved its worth. First up was local singer Les Johnson (normally to be seen with his band Les Johnson and Me offering up some croonsome velvet country stylings) who, armed only with his guitar and striking baritone voice sang a set mostly taken from his album 15 Hands. With his easy wit and rapport with the audience (remember, those sitting at the front less than a couple of feet away) this was a delightful experience. Anyone remembering a tipsy relative giving it laldy in the parlour at New Year will recognise the intimacy that was on offer here, fortunately without the attendant embarrassment. Johnson’s dark humour in the song introductions was excellent as he sang what seemed to be a love song to a horse on 15 Hands. Requested to sing a Ronnie Lane song he gave us a finely understated version of The Poacher and there was also a powerful rendition of Dylan’s Senor (Tales of Yankee Power). Best of all however was the “urban country” melodrama of Dear Marvin where Johnson was accompanied on vocals by a member of the audience (Meghan, sorry didn’t get the surname) for what was a fine Glasgow version of George and Tammy. 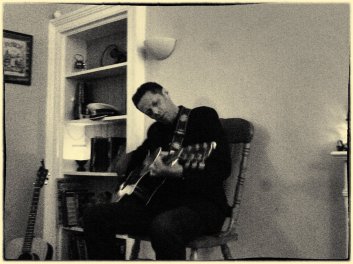 With a short break to refresh drinks, dash down three flights for the smokers and queue for the loo it was time for Chuck Hawthorne to come on. By then he’d already swapped at least a handshake with all in attendance and was on first name terms with those in the front row and his set was perhaps the best mixture of song craft, performance and informality that I’ve seen. Hawthorne is formed from the same Texas dirt as Guy Clark and Townes Van Zandt. Tonight he was freewheelin’ with nods to both telling stories about his one encounter with Clark before his fine rendition of LA Freeway while TVZ’s No Deal was quite affecting.  Hawthorne grew up in cowboy country and told his tales of working amidst the piss and shit of bovine herds before eventually signing up for the Marines reckoning that it might be safer and at least it was a steady wage. As the songs unfurled there were tales of his dad’s old tools, his mum’s erratic driving, his chance encounter with Ray Bonneville (who eventually produced his album) and finally a grim recounting of service in Iraq. As with Les Johnson, the frisson of hearing and seeing Hawthorne up close as he sang several songs from his album Silver Line was somewhat shivering. Away from the cover songs Hawthorne proves to be a gifted songwriter. He grabs blue-collar working songs by, well, the collar on The Gospel Hammer and Welding Son Of A Gun while Silver Line flowed wonderfully. Dusty ballads, hard hammering work songs, he works them all but the most poignant moment was on the incredibly moving Post 2 Gate, a song about a kid blown up by an IED in Iraq. Hawthorne was there, billeted in a Saddam Palace in the green zone, the kid familiar to the leathernecks as they drove in and out. Had a pin dropped at the end of this it would have startled all as there was an awesome silence. The balloon was burst as Hawthorne valiantly moved on to a cover of Tom Russell’s Navajo Rug but it was a powerful reminder that he’s lived a life and more. 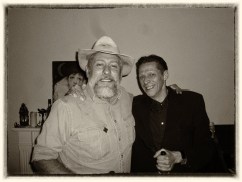 Getting back to the house concert concept, after the show both Johnson and Hawthorne were happy to pose for pics, sell CDs and just hang about.  Beers were quaffed and the fat was chewed. A tremendous night.