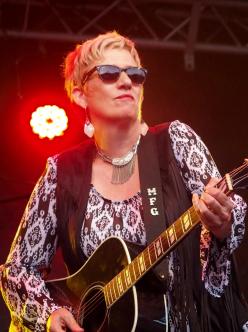 Last October Blabber’n’Smoke was intrigued to receive a bona fide album of Texan tunes that was recorded in France. The album, Long Way From Home was billed as recorded by Texas Martha & The House of Twang and some investigating (well, reading the liner notes) revealed that while Texas Martha AKA Martha Fields was indeed from the Lone Star State the House Of Twang were all Frenchmen who appeared to have been steeped in the whys and wherefores of Americana.  Now Martha has her second album, Southern White Lies ready for release (we reviewed it here), again recorded with her expert Gallic pickers (Manu Bertrand -Dobro, banjo, mandolin, Serge Samyn -double bass, Olivier Leclerc -violin, Urbain Lambert – guitar and Denis Bielsa –drums). Southern White Lies reverses the urge to go West as Fields heads northeast to the Kentucky foothills of the Appalachians, her mother’s homeland. Martha’s playing all over Europe to tie in with the album release and she and her band are making their first Scottish appearance this weekend at Perth’s Southern Fried Festival. She took some time out of her busy schedule to talk to Blabber’n’Smoke about the new album. First off however we asked her how a Texan musician comes to be living and recording in Bordeaux, France.

I’ve been coming over to Europe and to France in particular for the past four years after I was invited to play some festivals.  I have some friends who live around Bordeaux so I was invited to play here and I thought, “Wow, they like this kind of music over here” so I started to come over in the summer to escape the Texas heat and found that I really like the lifestyle. So just staying here and playing shows, I happened to meet some amazing players and eventually formed the band.

Your band are all French I believe.

They’re all French but they’ve been playing this kind of music since they were little bitty kids and they love it. They know more about the history and the trivia than I do. They live it and they are super players, they’ve played all over the world with some very well know French stars, Johnny Hallyday, Dick Rivers, stars for another generation but big names over here.

I’ve heard of Johnny Hallyday but not Dick Rivers.

Oh, he’s kind of like the French Elvis. He’s older now but he cut an album last year that I really like, he’s good.

Was Long way From Home your first album?

It’s my first solo album but I’ve played with other bands and in various collaborations back in the States. I’ve been writing songs since I was six or seven years old but I had another career. I was a professor in Texas, teaching but I was always playing my music, weekends and such. But now I’ve taken a hiatus from that to concentrate on the music for the meantime. I can always go back to that when I’m 80 or so. In the meanwhile I’m having a great time and it’s working really well.

Long Way From Home got some fabulous reviews

I was really pleased. We got a lot of radio play all over the place. I was very happy with the album, it was Texas boogie most of the way but as you know I love folk music, that Appalachian thing as well and in my live show I do both and people seem to appreciate that variety. I was really pleased with the way Long Way From Home turned out but for this one I really wanted to show that other folkier side. Some folk might prefer the honky tonk songs, some the folkier ones but I want to express both aspects, who knows, it might help me gain a new audience because of this slightly different approach but overall this is me.

Southern White Lies is quite different, the music’s acoustic, it draws from the Kentucky and Virginia Appalachian traditions with the cover art reflecting your memories of family playing on the front porch. Where did you get the inspiration for the songs you wrote for the album?

I usually always take it from real life, reflecting on things that have happened to my, my friends, my family, things that are happening politically. That’s how I’ve always dealt with things that I find joy in or sometimes pain, I set them to music.

There’s a thread going though the album, a sense of social justice. You see Southerners as being used and abused over the years, especially by politicians.

It’s happened to my family! Right now, there’s a lot of conflict going on, not just in the states, politically it’s a very difficult moment. I wrote two songs, American Hologram  and Southern White Lies maybe 12 to 18 months ago but I didn’t realise things were going to get this challenging. I’ve got family on both sides of the political spectrum and it can get really difficult to talk about these things over the kitchen table. I don’t think that people realise that we are all fodder for all these games that politicians play but we’re living it. I try to stay positive and one of the ways that I’m able to address it is through my music. I wrote a line in the title song that says, “pandering politicians, we need more musicians”. We need artists to really address what’s happening. If you think back to the sixties, there were a lot more artists singing about issues but there’s less of that these days, maybe because of the way the industry is these days. We don’t have much of a voice now and I think that’s one of the reasons we’re in the mess we’re in.

The album isn’t all political. I redid my song about my aunt (Do As You Are Told) because when I wrote it I really had in mind more of a bluegrass feel although I suppose it is a political song in a way just because of her own life. But there are love songs, bluegrass, Gospel and there’s a good old drinking song.

The Janis Joplin cover (What Good Will Drinking Do You)?

Yes, you’ve got to have at least one drinking song. It’s life. We cry, we drink, we go to church, we do all these things so it’s really just a part of everyday life.

So are you bringing the whole band over to your appearances at Southern Fried?

Yes. The only one who’s not coming over is Oliver, the violin player. He’d already been booked for something else by the time we arranged to come over but the rest of us will be there. We are playing two shows, one on Friday evening and then late on the Saturday night. I’m really looking forward to it, it’s my first trip to Scotland and the festival line up looks amazing.

Thanks for taking the time to talk with us. I look forward to seeing you in Perth.

As Martha says, she is playing two shows at Southern Fried with the Friday show on the free outdoor stage, an incredible opportunity to see an artist who in a short time has leapt to the forefront of rootsy American music. You can check her show times here.