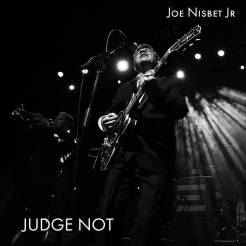 Last year Blabber’n’Smoke was intrigued by a singular release from Joe Nisbet Jr, one of Scotland’s premier guns for hire guitar players who regularly graces records and shows by the likes of The Proclaimers, Dick Gaughan, Justin Currie and Ags Connolly. His album, The Gospel According To Mr. Niz, is a collection of gospel songs which were originally recorded by quartets back in the 1940’s and ’50’s and was born out of Nisbet’s formative years when he accompanied his father, an evangelical preacher on a tour of the Southern US states. Encouraged by the album’s reception Mr. Niz has now decided to release his first self-penned composition, Judge Not, a song that again draws from the well of Gospel roots and adds his experiences in punk, jazz and blues over his adult years.

It’s an exuberant number, Nisbet’s guitar riding the rhythm with a nonchalant authority as he proclaims his sins. With hints of Ska and Mariarchi along with a hefty choral backing (featuring Andy May, Neil Weir, Bert Bertram and Justin Currie) it’s a jaunty take on tradition, as the man himself says, “although it sounds like a badly behaved gospel meeting in a New Orleans hip-hop club, it’s actually a punk record at heart.”
You can buy the song here but there’s a cracking video with the song set to a Betty Boop cartoon which will remind older readers of the good old days of The Old Grey Whistle Test, pre MTV.