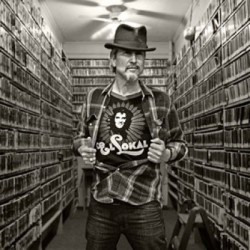 Ever the maverick, Howe Gelb returned to Glasgow to perform what was billed as a solo piano show, reports of the demise of his long-standing moveable feast of a band, Giant Sand trailing behind him. Gelb’s no stranger to performing solo and has been known in the past to drop his regular show if there’s a piano sharing the stage with him while scattered within his dauntingly large back catalogue are four albums of piano music (Lull Some Piano, Ogle Some Piano, Spun Some Piano and Snarl Some Piano should you wish to pursue them).  In almost any other case these discs would stand out as oddities or vanity projects, in the weird happenstance world of Gelb they are simply another outlet for his restless quest in search of another note, another way to capture the sounds around him, molecules of music I believe he once described them.

Anyhow, as Howe aficionados will know, the night was up for grabs, no one sure what to expect. This has caused frustration in the past, audiences puzzled by his somewhat gnomic utterances, his lack of a set list and detours which have seen him singing along to Kylie Minogue records. Tonight the first impression on entering the venue was somewhat surprising, the cellar venue, grungy to say the least and usually home to hot and sweaty shows with plastic beer glasses spilled due to jostles had seating set out with the front rows set out cabaret style, tables with candles lit. Sure enough there was a solitary upright piano up there, stage left, a chair also which led to the initial pantomime acted out by Gelb as he appeared on stage, sat down and unimpressed left the stage to look for another perch. He soon reappeared with another chair, a very similar chair in fact and spent some time clowning around trying to set up his seating. One had the feeling that at this point “serious rock fans” would be muttering and complaining but tonight it seemed that the audience were attuned to the man and his antics drew serious laughter, a phenomenon that continued through the night as Gelb turned in a show that recalled memories of Victor Borge, the Danish keyboard prodigy who turned classical music into a comedy routine.

Gelb’s target tonight was not the Minute Waltz but what we can consider The Great American Songbook and in particular those which are considered piano based jazz standards. Announcing that the night was to be devoted to his next recording, Future Standards, his foray into that weird world where serious jazz musicians rub shoulders with cocktail classics he proceeded to play an immensely impressive Cry Me A River. His croon was more than a match for Julie London’s torch singing, his playing displaying the occasional nod to the angular twists and dissonant chords of Thelonious Monk. Like Borge, Gelb was into explaining the music saying that almost any song can be turned into a cocktail standard before performing his own song Shiver with occasional ragtime and bop keyboard interludes. Well into his stride he then performed several songs from the forthcoming album, some sounding like Jack Kerouac performing with Steve Allen, others more cocktail jazz with Gelb asking the barmaid at the back if she knew how to mix a Martini. On Terribly So he stopped, explained that the song really needed a bass and drum rhythm before hauling out his Smartphone, dialling it to the studio recording therein and proceeded to duet with the phone held to the mic as he sang along and tinkled some ivory. Classic Gelb here.

Aside from Victor Borge Gelb also summoned up the ghost of Chico Marx with his keyboard mannerisms but it was Chico’s brother Harpo who loomed large as Gelb stood up and removed the piano’s lid and front exposing the strings. Harpo famously wrecked a piano in the movie A Day At The Races, eventually pulling the strings from the piano carcass and using it as a harp. Gelb didn’t go so far as that but his plucking of the strings added to the occasional dissonance of his playing, his version of John Cage’s prepared piano.

He started with a cover and ended the set with another. This time Leonard Cohen’s A Thousand Kisses Deep with his very fine croon a suitable match for Cohen’s voice and a fine ending to a show that, aside from the  comedy and verbal musings, allowed Gelb’s undisputed talent to shine. Show almost over Gelb did strap on his guitar for a fine rendition of Paradise Here Abouts (from the Sno Angel Like You album) before finishing with the wonderful Wind Blown Waltz, an opportunity to show that he can be as idiosyncratic on guitar as on piano but again a reminder that he is a supremely gifted songwriter.

Erika Wennerstrom, singer with Cincinatti band The Heartless Bastards, opened the show. A diminutive figure she has a big voice and she played several songs from her band including Marathon. Here she didn’t need the band accompaniment, her guitar shimmering and trebly as she intoned the lyrics. She struggled with the sound at times, her guitar almost booming and threatening to feedback but as she said to the audience this was a first time solo outing and she was still finding her feet. I Could Be So Happy was a fine performance, her voice recalling the primal tones of Patti Smith. 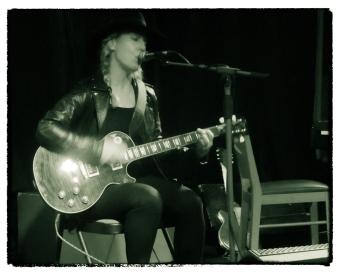 There’s time to catch more Gelb at the piano here.