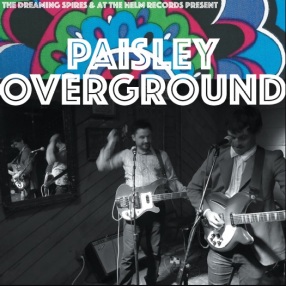 Oxford’s Dreaming Spires are well known for their jangled take on classic sixties California bands with their last album Searching For The Supertruth one of the nominees for the inaugural UK Americana Awards. For their debut release on At The Helm Records they’ve come up with a concept of sorts, another nod to the past for sure, Paisley Overground being an obvious tribute to the 80’s Paisley Underground, the LA based combustion of ex punks and garage bands who dug The Byrds as much as the Sex Pistols. There’s the album (or mini album, eight songs and under 30 minutes) which is released on plum coloured vinyl and which features four songs from the Spires and an additional four from friends who share their passions and there was even a mini package tour which took in four dates down south last week to coincide with the release.

Side one (and it’s really nice to write that) features The Spires and three of the four songs here were recorded in the legendary Ardent studios in Memphis which they visited when they played Americana Fest last year.  They open with the title track, a glorious smorgasbord of 12 stringed chiming guitars, soaring organ and harmonies galore as Robin Bennett waxes in autobiographical mode as he sings about finding a new kind of sound and his love of  Paisley shirts and 12 string guitars. Harberton Mead hymns an Oxford street with a Stax like propulsive beat coloured by sitar like guitar breaks and a brief organ led freakout at the end. The Road Less Travelled eases up on the clutch as it glides into sight. A ballad that’s imbued with the spirit of Big Star, stately piano, keening pedal steel and soaring vocals remind one that Chris Bell was as integral to Big Star as Alex Chilton and the band here are just magnificent. Silverlake Sky, the final part of their four piece jigsaw is the one song recorded in Oxford but it fits perfectly with The Road Less Travelled as it again recalls Big Star.

Side two cements the Paisley Overground concept by the clever trick of having one of the Paisley underground movers and shakers, Sid Griffin opening. Griffin here teams up with Tony Poole from the 70’s UK band Starry Eyed and Laughing (a living link between the 60’s jangle and the later revivals) for Tell Her All The Time, a song that recalls the earlier and folkier Byrds. The remaining three songs are from friends of The Spires. Co-Pilgrim have a shimmery sixties feel on the languid Save The Queen Blazer, The Hanging Stars have a Topanga canyon easy feeling vibe on their free flowing Crippled Shining Blues, twin guitars offering memories of Manassas. Finally The Raving Beauties, a band that grew out of a fictional account of a sixties Byrds inspired band offer up Arrows, a song that reminds one that the jingle jangle pop sound wasn’t confined to LA as they summon up memories of Merseybeat and The Searchers.

The album arrived just too late for our recent spell of Mediterranean weather but when the sun comes back out this would be the perfect accompaniment to a lazy sun speckled afternoon. In the meantime you can dig out the sun lamp and pretend, the songs will transport you.

There’s a fine interview with Joe Bennett on the disc here and you can buy it here. The Dreaming Spires will be coming to Scotland for a show at Southern Fried Festival at Perth on the Sunday Outdoor Stage.

One thought on “The Dreaming Spires/Various Artists. Paisley Overground. At the Helm Records”