Findlay Napier hit his hometown in the midst of an extensive tour promoting his current release and drew in a packed crowd tonight. He’s flying solo on this tour but the lack of his VIP Band didn’t hinder what was a happy homecoming, Napier on top form, ebullient, and the crowd, all seemingly well versed in the material, all too happy to be honorary VIPs’ for the night, coached on the choruses of several songs by the persuasive singer.

He’s a hard worker, two 45 minute sets with a brief interval, the bulk of the material garnered from his album and EP project, Very Important Persons. For those who don’t know, Napier, in partnership with Boo Hewerdine has crafted a set of songs that can be described as potted biographies of several characters, some famous, some less so. That description however fails to capture the art and craft of the songs, the subjects a springboard for Napier’s reflections on life, his observations and couthy wit. There was no sense of tonight being an aural equivalent of Madame Tussaud’s with Napier wheeling out one famous character after another. Although he’s quite open about his original research tool being Wikipedia he has been living with these characters for the past two years and in a sense they could now be considered family. This was apparent early in the set on the moving Hedy Lamarr, a beautiful song which focuses on Lamarr’s enforced contribution to the war effort as a pin up girl and starlet, her undeniable scientific skills cast aside.

There were several such moments throughout the night, Napier able to deliver his songs in a tender, almost frail manner. Princess Rosanna Drowned In The Clyde was a perfect obituary for an unknown victim of an unknown act, the song itself inspired by some graffiti Napier happened upon while Show Folk was an evocative sepia stained tale that conjured up images of flickering newsreel. There was celebration also, The Man who Sold New York was a vigorous performance, the bare faced cheek of con man George C Parker (who sold NY landmarks to unsuspecting tourists) given a boisterous run through while the folky singalong of After The Last Bell Rings (surely a folk pub standard in the making) captured late night revelries. 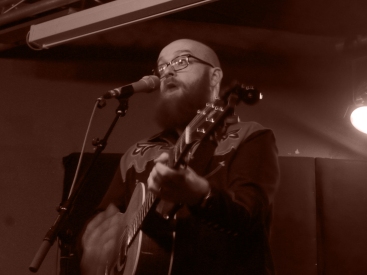 Aside from the VIP material there was a good helping from his back catalogue that provided mirth and merriment aplenty along with a reminder that Napier was winning folk awards back in the mid noughties with his band Back Of The Moon. One For The Ditch is a classic drinking song that recalls The Dubliners and Gerry Rafferty and tonight the audience were well in tune singing along with some gusto. Napier delved into his bag of memories for songs such as George, a song that Phil Lynott might have written were he raised in Granton On Spey. He’s Just A Sweetie, a flat sharing song of student lust and loss was preceded by a hilarious account of Napier’s own flat sharing days which included the presence of a bus stop in the hall, purloined on a drunken outing, a logical step up from a traffic cone.

The songs poured out, Napier was full of fun, perhaps making use of the stand up comedy routine he’s recently explored. He encored with a fine Mickey take on the “art” of encoring before his excellent delivery of the traditional A Wee Drappie O’t transforming the Glad Cafe into a Howf for a precious short time. He ended with a roaring version of Rab Noake’s Open All Night, a song he professed to be his favourite before pointing out he plays it at every show. The esteemed Mr. Noakes, in the audience tonight, wasn’t available for comment but the crowd did love it.

You can read an interview with Findlay  here

I must confess to really wanting to like Treetop Flyers. They hit all the right buttons, their name copped from a Steve Stills song, their vibe that West Coast seventies highway hum, the liquid guitars spiralling into the sunset. Palomino, their second full album, continues in the vein of its predecessor, 2013’s The Mountain Moves, the vocals recalling America’s Dewey Bunnell but at times the music is reminiscent of mid seventies bands who added soul music, Latin influences and jams to the initial clear air of the originals.

Several of these songs exceed the six minute mark and are dominated by whirling organ and guitar flourishes that cloud the quality of the songs. Live they may be quite exhilarating but on disc there’s a temptation at times to skip to the next track. Having said that the setting might be an issue here as when I listened to the album in the car on an hour plus drive it was quite invigorating and remained in the player for a second listen.

The album gets off to a fine start with the grand sweep of You, Darling, You, a song that does inhabit that same Ventura Highway that America ventured down but in this case instead of long hair flowing in the breeze of a convertible there’s a sense of claustrophobia, windows tight shut against the night, the road a lost highway. Sleepless Nights zips into action with Allman Brothers’ guitar like duelling as the band buckle up for another bumpy ride, turning off to Altamont instead of Woodstock with a fine pastoral coda acting like a rear mirror view of what could have been. There’s another left turn as Lady Luck tucks into another strand of yesteryear, UK post psychedelic rock, Canterbury bands such as Caravan. Here mellotron and guitar swirl around portentous lyrics, the song wouldn’t be out of place on an early King Crimson album. From here on in there’s a patchwork of sounds. A lysergic soul number in It’s A Shame, a Santana like rumble on the lengthy Dance Through The Night (which, if were a stick of rock, would have Fillmore West stamped throughout it) and on Never Been As Hard they dive into a submarine world of swooning guitars and soft mallet percussion as Reid Morrison plumbs emotional depths the likes of Mercury Rev could only imagine. There’s a magical end to this song as a discordant piano outro abruptly stops as the band launch immediately into their closer, Wild Winds.

Apparently, the album was recorded following a period of turmoil for the band members and this is reflected in the barest song here. St. Andrews Cross is a stark lament set to acoustic guitar, the harmonies casting some light on the darkness like a stained glass window in some dark cathedral. It starts wonderfully but like several of its siblings it could have done with some pruning. Overall, the album is a bold venture but it lacks focus although there are some killer songs in here that definitely grow with repeated listens and which are tailor made for the stage.