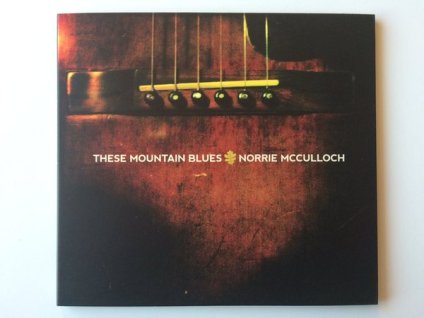 Ayrshire man Norrie McCulloch’s 2014 album, Old Lovers Junkyard, remains possibly Blabber’n’Smoke’s favourite Scottish album of the decade. McCulloch, seemingly from nowhere, wove a magnificent tapestry of country and folk influenced sounds on the album, its creamy pedal steel to the fore. However, as we mentioned when reviewing the album, there was more than a hint of classic UK folk rock lurking in the grooves, in particular the slightly jazz inflected keyboard work that John Martyn and Nick Drake used to adorn their songs on the cusp of the sixties and seventies. These Mountain Blues, due for release in February, reverses the mix. Yes, there are some sublime songs here which could stand tall beside the works of Townes Van Zandt or Guy Clark, the pedal steel still warms but the prominent instrument here is the piano, its cascading notes colouring the album with an autumnal melancholy and offering an understated grandeur. A perfect accompaniment for McCulloch’s excellent sense of nostalgia and regret expressed through his songs and his very fine, slightly wearied, voice.

Recorded live to analogue tape in the space of three days at The Tolbooth in Stirling (which just happened to have a baby grand piano in situ), These Mountain Blues captures McCulloch and his band (Dave McGowan, upright bass, piano and pedal steel; Marco Rea, bass and piano and Stuart Kidd, drums) in fine fettle. There’s an intimate organic feel to the disc as if they were playing in your room conjuring the images from the songs in front of you. McCulloch’s writing is evocative as he sings of his landscapes, his forebears and his descriptions of outsiders trying to fit in as on the impressive New Joke.

The album opens with Calico Days, a punchy acoustic guitar riff, not dissimilar to Bert Jansch’s work with Pentangle, grabs you before the rhythm section and piano glide in. A hymn in praise of life and the power of music McCulloch welcomes “old friends,” urging them to “bring your stories and your grace on these Calico days.” It’s a wonderful breeze of a song and the most upbeat on the album although the sweeping Pass By My Door which follows is a close contender. Here McCulloch captures some of that heady mix of folk, blues and jazz which informed Van Morrison on songs such as Young Lovers Do on astral Weeks. The freewheeling vibrancy and joyousness of the song is really that good, the piano celebrant, the lyrics approaching Morrison’s stream of consciousness way back then.

However if there’s a template for this album then it’s a fair bet that John and Beverly Martyn’s Stormbringer would fit the bill. Recorded in Woodstock in 1970 with Levon Helm on drums that album was produced by Joe Boyd with arrangement by Paul Harris who also played the very elegant piano parts. The sound they created informs much of These Mountain Blues with the title song a fine example. It’s a poignant recollection of McCulloch’s visit to the grave of Townes Van Zandt and as it soars and weeps the piano chords are resonant amid the guitar balladry at the heart of the song. Hard To Be The Man You Are Not and New Joke follow in similar style, wearied songs almost limping along but buoyed up by the piano along with pedal steel on the latter and it’s pedal steel which predominates on the tremendous When She Is Crying Too, a song which fulfils the promise shown on Old Lovers Junkyard. It’s a beautiful song, expertly played; steel guitar gliding over the slow rhythm and rich piano playing as McCulloch turns in a great vocal and lyrics,

” when that thief nightime comes around and steals the stars before they’re even out / that’s not the only crime even when you’re not here/ all it takes is a song for the pieces of my heart to start to disappear.”

Wreathed in a forlorn LA country vibe, When She Is Crying Too has some of the emotional heft and melancholic beauty of Gene Clark in its veins and is the stand out song here. That’s not to dismiss the remainder as McCulloch sings of his grandfather’s travails in the coal mines on Black Dust, a song that is defiantly rooted in local folk roots while The Old Room is another heady bout of nostalgia delivered with a light touch. Cloudberry Flowers is suffused with jangling acoustic guitar and woody bass and again captures some of that late sixties folk vibe and the album closes with another superb song, the ethereal Heart’s Got To Be In The Right Place. This tale of a split family, mother and father separating, is given a superb arrangement, the instruments delicately tip toeing around each other as McCulloch sounds forlorn, it’s a song that tugs at the heartstrings.

Richly textured, warm and chilling, soaked in memories and delivered with its heart on its sleeve These Mountain Blues is proof that Norrie McCulloch is mining a rich seam of songwriting. He transcends his influences creating some beautiful music which deserves to be heard by all who care about music.