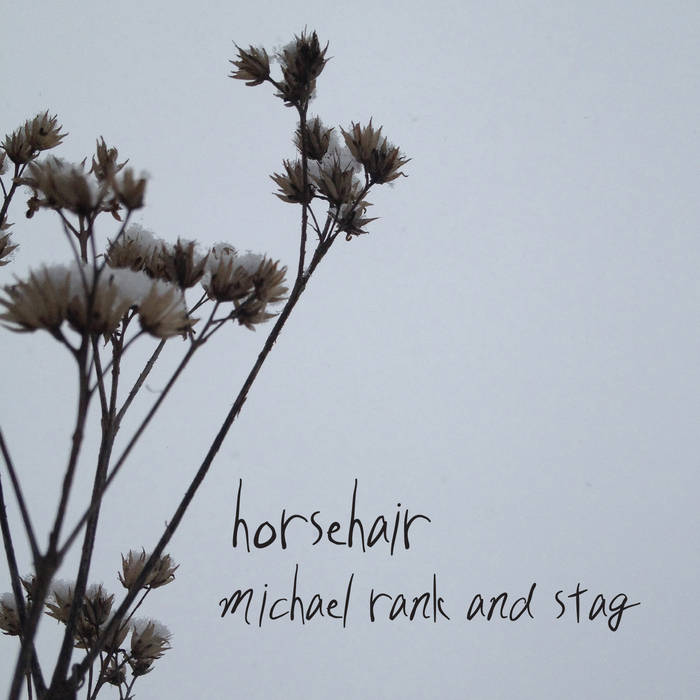 Blabber’n’Smoke makes no bones about our stone cold admiration for the music of Michael Rank, a man who has now released five albums of “wracked and raw” country music following the breakup of his relationship with the mother of his young son. The first album, Kin, was a blasted heath of an album with some fiery guitar work that might now be considered a catharsis of sorts, a casting aside of his old world (which included his band Snatches of Pink, wonderfully described by Rank as his volume and tantrum days). Rank admits that following the birth of his son he’d pretty much given up on music but after the split he picked up a guitar and songs came tumbling out. Five albums later he’s still hurting it seems but from his hurt he’s fashioned a great deal of beauty, a fragile and tender beauty to be sure but emotionally powerful and, more to the point, some of the best music of the past four years.

Horsehair continues Rank’s odyssey into classic seventies stained folk and country rock. His shape shifting collective band Stag here comprise of Nathan Golub on pedal steel, Alex Ingleheart, electric guitar, Ron Bartholomew, mandolin, Jesse Heubner, bass, Gabriele Pelli and John Teer, fiddle, James Wallace, organ and John Howie Jnr, drums. A plethora of players but a bare boned outcome with the full line-up rarely all present. The predominant sound is of jagged mandolin, ragged guitar and roaming fiddle, all swaying to Rank’s fine feel for the Stone’s country phase with some of Rod Stewart’s early work sneaking in. Neil Young’s ditch years are also in the mix while Rank seems at times to be striving for a less desolate landscape eventually finding harbour in the blissed out groovyness (or cosmic floppiness) of The Grateful Dead in the early seventies. Capping this is the presence of Mount Moriah’s Heather McEntire who sings with Rank throughout, her voice cajoling, comforting and supporting his frail husk of a voice. They pair wonderfully in the style of Gram Parsons and Emmylou Harris on their most famous collaboration, Love Hurts, wounded hearts waltzing around to wounded music.

Rank has nine songs here and they all have moments that raise the hair on the back of the neck. The opening Frontier is the starkest number, hesitant mandolin and lonesome fiddle on an ode to lost love. At the other end there’s the full band country stumble of This Side of Texas which opens with fiddle sawing over mandolin and acoustic guitars the song slowly building up with curling electric guitar and organ briefly added to the mix. It’s an awesome song, the lyrics by turn poetic, “stars are falling out like ashes, that great big sky done swallow me”,  fearsome, “we keep a list of all our captives, we string a necklace with their teeth,” but ultimately returning to the personal as Rank and McEntire sing “I wrote a song to bring her back son, one song don’t stitch a wound.” Husk is another wounded country song that barely stumbles out of the gate initially before the vocals come in. Pretty soon Nathan Golub’s pedal steel curls into view and leads the song into a lengthy outro with the players weaving and dancing musically creating a vibe not dissimilar to that of the Grateful Dead stretching out on their country ambles in the early seventies, real cosmic American music.

It would be easy to paint Rank as a miserabilist wallowing in his loss but even on a song like Trails where he sings “The one you left behind you’re running through my mind you’re always on my trail.. I wish I was enough so you would stay here with me…ain’t nothing about it easy”  is dressed in a wonderfully sparse arrangement with delicate organ and spare guitar conjuring a spiritual feeling towards the end. There’s also a beautiful moment when McEntire almost sobs, capturing the feeling evoked by the song.

Mexico jumps into view with a Stone’s like guitar lick on the raunchiest number here while Horseman is dusty Americana with the fiddle given free rein in the manner of Sid Page on Mike Wilhelm’s magisterial reading of Me and My Uncle with some Scarlett Rivera thrown in for good measure. However before ending we must allow mention of the album’s highpoint.

Two Shades is simply one of the best love songs of the past ten years capturing as it does the ecstasy of togetherness and the pain of separation. Rank acknowledges his ex partner’s role as his son’s mother and allows that their time together was special singing “I’ve got a boy here and he’s two shades of something that once upon a time was something to behold”  but it’s the chorus that raises the song well above the ordinary. Rank and McEntire rival any celebrated duos as they entwine around each other singing “And I know we ain’t covered in roses and I know we ain’t covered in jewels but I know that when I used to hold you most everything looked better for me and you, near everything looked better for me and you”  over a gorgeous simple melody garlanded in honeyed pedal steel. If Dolly Parton recorded this it would be considered a classic.

So five albums in and Michael Rank just seems to get better and better. It’s a Blabber’n’Smoke bucket list deal to see him at some point but presently he’s keen to stay close to home. Fortunately there’s a wealth of videos of him and various permutations of Stag populating YouTube, all of which support our contention that he’s the bee’s knee’s right now. We now await album number six.