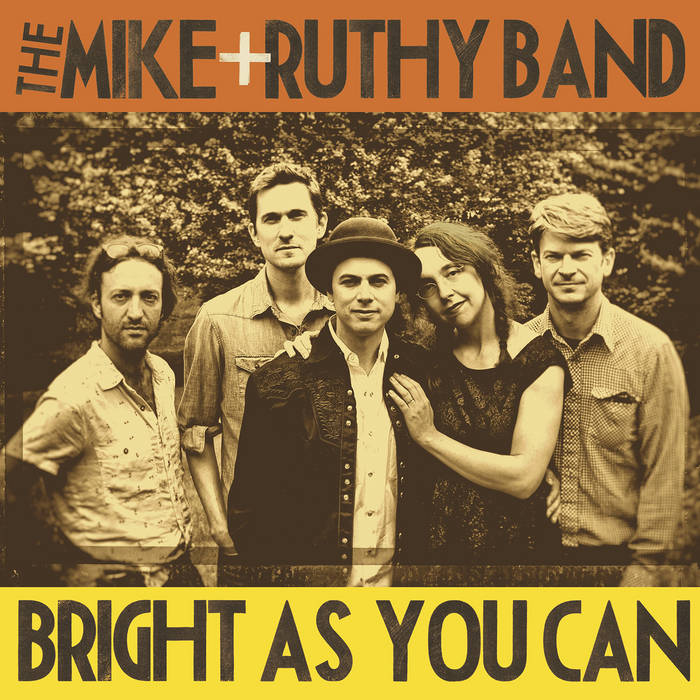 Mike Merenda and Ruth Ungar are the heart and soul of The Mike + Ruthy Band, appearing as a folk duo for several years they were praised by the late Pete Seeger who appeared at their inaugural summer Hoot Festival. The muscle and sinew is provided on Bright As You Can by an ace team of musicians, drummer Konrad Meissner (Brandi Carlisle, Tracy Bonham), bassist Jacob Silver (Emmylou Harris, Arlo Guthrie) and pedal steel man Charlie Rose (Elephant Revival, Josh Ritter) giving the album a full bodied swell. With adornment from horn players, harmony singers (including Amy Helm and Aoife O’Donovan) and additional guitar and keyboards Bright As You Can is a full blown folk rock album that recalls Fairport Convention circa Rising For The Moon and some of Richard and Linda Thompson’s work.

Mention of Fairport and Thompson doesn’t indicate that the band are reaching for an “English” sound, indeed it’s those moments when Denny, Thompson, Lucas et al were reaching out to America that is recalled here. There’s a solid rhythm section that pulses throughout the album offering a solid bedrock for the songs be they fiddle based, banjo laced or borne aloft on wafts of sax, trumpet and trombone. There are some songs that conform to the basic rootsy Americana template such as the delightful pedal steel/banjo interplay on The Farmer and the homely folk of Simple & Sober while Freckled Ocean builds on a raft of beguiling pedal steel with Ruth Ungar’s voice commanding. The rootsiest song however is the one cover on the album, their version of Michigan’s Steppin’ In It’s The Ghost Of Richard Manuel which is just this side of sublime. There’s a feisty feel to much of the album from the off as a brief tune up introduces the opening title song which tramples down a rocky folk route, fiddles scraping away over an urgent bass and drum beat. Word On the Street launches with some powerful pedal steel licks before Merenda lays down a powerful manifesto as he sings,

“I’m in the clouds babe, you’re on the land, still we kick ass together in this folky band.”

Rock On Little Jane is pumped up by the horn section as Ungar muscles in vocally over a riff that recalls vintage Neil Young while the propulsive bass and organ on What Are We Waiting For channels Tom Petty power pop. The Thompson/Denny parallels are most evident on the fiddle led drone of Legends Only Appear In Black and White with the band swamp laden, wading through a rock’n’roll fuzz as Ungar and Merenda summon up ghosts of folk rock in their vocals but their best is heard on the perfect marriage of banjo, rock rhythm and horns that is Golden Eye with Ungar sensual and the song itself quite addictive.

3 thoughts on “The Mike + Ruthy Band. Bright As You Can.”