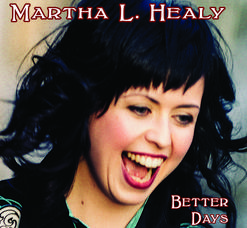 More home grown Americana in the form of Martha L. Healy, a Glaswegian who grew up in a musical atmosphere with Celtic music sharing space with classic American folk and country. As she puts it, “Everyone was listening to Nirvana, rap or dance music, and then there was me, buried in my bedroom, listening to Bonnie Raitt, Dixie Chicks, Sheryl Crow and Patsy Cline.” In 2014 she went to Nashville, utilising contacts made on a previous trip and recorded Better Days with a cast of local sidemen (all with the sort of pedigree one would expect from Nashville) before coming back and polishing it off in Glasgow with some overdubs from local musicians. The result is an album that belies her evident youth with several of the songs (in the main penned by Healy and Phil Ferns) sounding assured as she delves into classic country sounds along with some received wisdom from her ancestral Irish background. She’s got a grand voice which owes more to her professed American heroines with little to suggest that she’s Scottish but when you can sound like a honky tonk angel on the ballsy swing of Too Much Vodka why go down The Proclaimers route. The Celtic connections are to be heard in the lilting balladry of Enough and Shame, Shame, Shame but are foremost on the autobiographical Burtonport, a song that celebrates her Irish heritage with some aplomb, fiddle and accordion wheezing away over martial drumming.

The album opens with the title song which could easily have come from a Dixie Chicks album, a defiant celebration of living for the now it’s uplifted by some feisty accordion and harmonica. The Lovin’ Kind has a mild mariachi touch and to our ears is reminiscent of vintage Linda Ronstadt. Shame, Shame, Shame is a wonderful hurt love song with the band in very fine form with spare pedal steel (from Tommy Hannum) and mournful harmonica (Rory Hoffman) supporting Healy’s pained vocal. State Of Blue is an excellent slice of pure Americana, a pot pouri of harmonies and country rock stylings, trumpet and curling guitars all driving Healy’s gutsy vocals while the murky swamp blues of Nobody’s Dead allows her free range on the vocal front. Healy breezes through the mandolin dappled 13 Hours and closes the album with a spare rendition of Healin’ Wind. Armed only with her guitar it’s a powerful redemption song allowing her voice to ring clear.