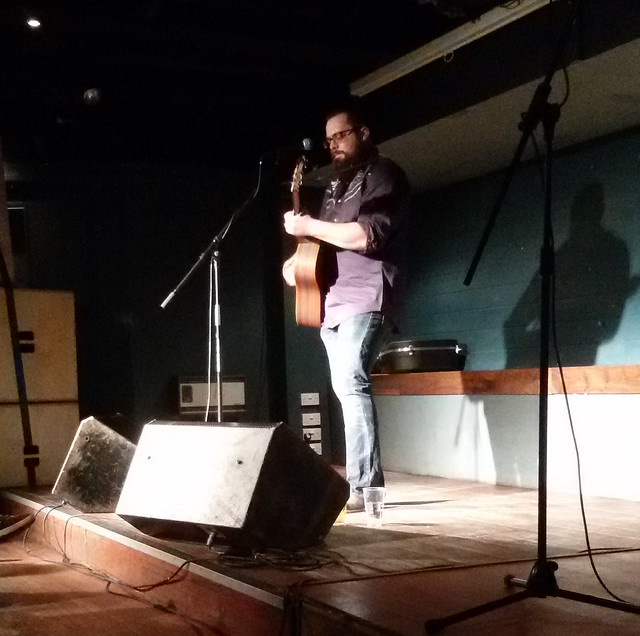 Listening to Oxfordshire’s Ags Connolly’s debut album, How About Now, you would swear that he was born and raised in some US Southern State. On his first visit to Glasgow this notion was dispelled the moment he spoke and his chipper English accent was there for all to hear. A curious duality perhaps but rather than sing his excellent tales with his own voice (and if so in danger of coming across like a serious Adge Cutler) Connolly has immersed himself in country music, in particular the burgeoning Ameripolitan movement, and with his adoption of the genre’s musical style he’s seen fit to adopt the vocal mannerism’s of his heroes. It’s certainly a winning decision as borne out by the rave reviews the album and his live shows have gathered with Country Music People magazine declaring “Connolly is the closest we’ve ever come to an English Willie Nelson.”
An imposing figure with a natty Nashville shirt, Connolly delivered his songs of loss and woe, shaped and comforted by the demon drink, with a fine emotional thump and such conviction that  the audience were transported to Nashville’s Music Row. A Good Memory For Pain was an instantly memorable number that recalled George Jones, a thought that was reinforced by the tear jerking That’s The Last Time. On record That’s The Last Time is perfectly played by the band assembled by Edinburgh’s Dean Owens who produced the album. Live, Connolly dredged all the emotional depths of the album version with his heartworn voice and simple guitar accompaniment. Even more heartrending was his masterful rendition of She Doesn’t Need Anyone Anymore, a real tears in your beer moment but the emotional highpoint (or low point perhaps) came towards the end of the set when Connolly sang the powerful Get Out Of My Mind, his voice as rich as Charlie Rich’s was.
Elsewhere Connolly name checked his influences on the sturdy manifesto that is When Country Was Proud before describing his recent visit to Nashville where he met one of his heroes, the subject of his song, I Saw James Hand. Hand apparently arrived just as Connolly had sang the song leading him to confuse the audience by promptly singing it again. Of course Connolly played the song tonight and followed it with a fine rendition of Hand’s song, Over There, That’s Frank, a magnificently boozy honky tonk lament. Scattered through the set covers of Johnny Paycheck’s Slide Off Your Satin Sheets and Shel Silverstein’s Jennifer Johnson And Me demonstrated Connolly’s mining of country’s rich seams and with several new songs unveiled that match the quality of those he’s already recorded it seems that Connolly might just be the UK’s best country act about today.