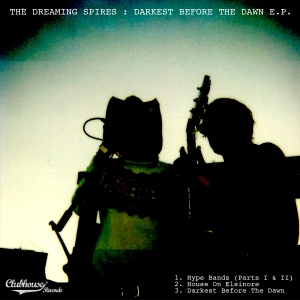 Oxford’s The Dreaming Spires are based around brothers, Robin and Joe Bennett who together have a quite a history toiling at the Americana coalface. Their previous band Goldrush had a good pop at making it big and for a period they were in an early incarnation of Danny & The Champions Of The World while in their spare time they were prime movers in setting up Truck Festival. Darkest Before The Dawn is a three song curtain raiser for their second album due early next year. As with their debut album, Brothers in Brooklyn which related some of their adventures in the States, there’s an autobiographical element to the EP with the three songs relating to a friend of the band’s, a guy called Danny who co-wrote several songs previously with Robin Bennett. According to Bennett Danny fell on hard times and the EP is an elliptic account of their relationship and the travails of touring in America.

The EP opens with the seven minute jangled jewel that is Hype Bands (Parts I & II), a song that starts off like Big Star backed by The Memphis Horns as Bennett packs in personal experiences and name checks or alludes to classic American music icons, songs and singers. The addition of the horns and the groove that the band lock into are reminiscent of Danny & The Champs’ recent forays while the road trip element recalls some of The Wynntown Marshals’ album, The Long Haul. It’s a brave, slightly convoluted, adventure with wide-eyed wonder at being in the land of musical heroes dulled by the actual enervating experience of being part of the biz. Musically however it’s a great rollercoaster of a song which definitely benefits from repeated listens as it caroms from jangled country rock to The Band like funky horn grooviness.

The mysterious Danny (actually, with some deft Googling you can easily check out his identity and rest assured he has heard the songs and approves) was the brothers’ road manager on their first trip. House on Elsinore finds them back in LA with Danny in a dark place and the band adopt the identity of one of the classic bands who epitomise the duality of LA. There’s a mighty Byrds thunk from the off with thick 12 string jangle recalling their baroque fondness of Bach. It’s a glorious song that has some of Crosby’s medieval trappings woven throughout.

Darkest Before The Dawn ends the EP on a minor key as The Spires return to Big Star territory with a song that recalls Alex Chilton at his best. Wounded and vulnerable but eventually optimistic as the song is wafted upwards by a heavenly chorus and soaring guitars, a song to make Nick Kent cry.

We mentioned above toiling at the coalface of Americana and in the press release for the EP Robin Bennett expresses a fear that UK bands playing American influenced music has at time seemed laughable before going on to explain that The Kinks, The Beatles and The Stones were all doing this before UK Americana happened. On the evidence here it’s apparent that this is no joke. The EP is a powerful chunk of music, influenced of course by some classic American bands but in the end whether they come from Oxford, England or Oxford Mississippi is irrelevant when the result is as delicious as this. It whets the appetite for the new album and you can read more about that in an interview with Robin Bennett here. The fact that Tony Poole of the criminally underrated 70’s UK Americana rockers, Starry Eyed & Laughing is involved is proof indeed that Americana is a state of mind, not place.