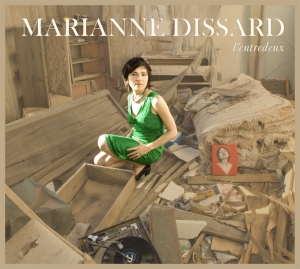 A while back we reviewed Susie Hug’s latest album, recorded in Tucson with the help of Calexico, here Marriane Dissard performs a similar trick with an album produced by Calexico’s Joey Burns, recorded in Tucson and released on the same label, Vacilando ‘68.
Dissard is a filmmaker who relocated to Tucson with her then partner, Naim Amor, several years ago. She was the femme fatale vocalist who graced the Calexico song The Ballad of Cable Hogue on their Hot Rail album leading to her setting out as a recording artist in her own right. The title L’Entredeux can be translated as in between two and reflects her position as a singer very much in the French chanteuse tradition but recording with some of the cream of Tucson Americana musicians. Burns produces and plays guitar, bass and piano (and wrote the music for the majority of the songs), band mate John Convertino adds his unique shuffle and Willie Nelson’s harmonica player Mickey Raphael pops up on one song. In addition Dissard’s ex partner Naim Amor (another honorary Tucsonian) writes, sings and plays on several tracks.
While there is none of Calexico’s epic Mexicana forays on display, the committed listener will recognise Burns’ (and indeed Convertino’s) fingerprints all over the album. To Burns’ credit he has not produced an album of Cable Hogue retreads but added a deeply sensual backdrop to Dissard’s excellent voice. The songs are very much in the European tradition ranging from the Djangoesque Les Draps Sours to the Europop confection that is Les Confettis but any similarities to Eurovision pap are firmly stamped out as the players add layers and embellishments that drip with conviction. The best example is Flashback with its strong guitar outro while Merci De Rein Du Tout is sublime in its multilayered form.
Over it all is Dissard’s voice, strong, sultry, sexy, at times she sounds like a successor to Juliette Gréco, a soundtrack for anyone for whose vision of cool is early Godard, Gauloise cigarettes and left bank beatniks. When she sings on Sans Facon the effect is hair raising while Cayenne seeks out another (sometimes) French speaker from the Americas in the form of Leonard Cohen.
While Dissard sings all the words in French one doesn’t need to understand them in order to succumb to this album’s beauty.
Available via the internet for some time this UK release has two live songs added and is available here while Dissard’s website is here