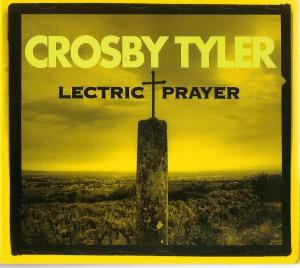 Tyler’s last album, “10 Songs of America Today” was an accomplished piece of Americana detailing a multicultural life in the mixed up mess that America finds itself in today. Despite this it was an uplifting album Helmed by Peter Case there was a blue collar sub Springsteen type feel to it but when he toured the UK last year in lieu of Case (who had undergone cardiac surgery) he unveiled another side to his character, a bohemian troubadour steeped in American traditions, the railroad, the carny, the hobo, the latest in a line that included Guthrie, Leadbelly, Ramblin Jack Elliott and Michael Hurley.
Lectric Prayer reflects this side of Tyler, less orchestrated than 10 Songs here he is supported by Sarah and Sean Watkins of Nickel Creek, Don Heffington (Emmylou Harris and Lone Justice) and Sebastian Steinberg (too many to mention). The sound is acoustic with the violin well to the fore. Tyler’s way with a melody and lyric are as strong as on the previous record and he delivers again with his well worn husk of a voice.
In this more traditional setting there is less of the mordant observation apparent in 10 Songs but Tyler is able to delve deep into tradition to produce some fabulous songs. The stringent folk blues of Ooh You’re scarin’ Me and the rickety gospel of Train To Heaven are stompingly good. The introspective Bless That day and Good Ol’ Circus days reflect his ability to capture an audience with nothing but his guitar and talent. Lectric Prayer is a hypnotic groove with wheezy harmonica and a railroad rhythm and the tub thumpin’ Runaway Hellbound Train allows the band to swing merrily.
Overall this is probably a better album than 10 Songs. It should appeal to anyone who thought Springsteen was earthy due to the Seeger Sessions or indeed anyone interested in modern day American folk. Tyler is a cool hobo dude indeed.
There’s a wealth of information on the two albums on Tyler’s website and here’s the opening song Tears of Blood